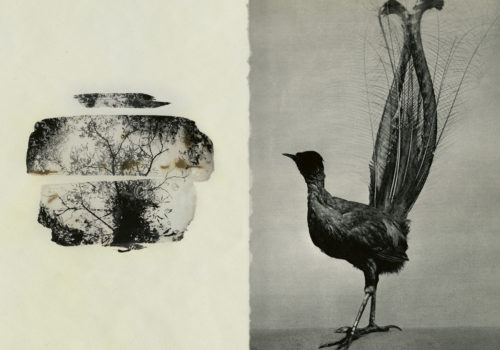 In a sensitive and curious object, the Spanish artist explores her obsession with the birds that inhabit our spaces and carry many symbolisms. She has produced sumptuous collages which, gathered in a book, form a poetic encyclopedia to celebrate the bird. Ícaro is a book published by Edicions Anomalas and co-edited with the Comunidad de Madrid.

One day while walking, looking for pigeons she loves to photograph so much, Irene Zottola came across a tattered book, near a glass bin and dog turd, which was dedicated to birds. She sublimated the content by working on it with personal collages, adding here images from a book her mother gave her when she was a child and personal drawings.

Little by little was born this very beautiful work, of a rather small format and which emphasizes the preciousness of the content, with a paper that drinks the ink and fragments of texts on birds that the artist wanted to make more important or on the contrary erased.

It is true that reading certain passages, birds have this celestial dimension that we sometimes forget, carrying our own animality, as this purely scientific observation explains well, but which finds a deeply poetic echo in Irene’s book. Zottola:

“The bird reacts actively to everything around it, quickly spots dangers, notices changes in situation and absorbs everything that happens around it, but it does not think, its action is instinctive. ”

The artist’s bias is to make you feel over the pages a certain atmosphere of evanescence, as if you had to squint your eyes to see the beauty of the birds and how feathers and wings fascinate us as much as they do. they haunt us, browsing the pages, here in pure evocation, there with an astonishing close-up.

Called “Ícaro”, his project is obviously a nod to the Greek myth which wanted Daedalus’ son to go too close to the sun during a flight and end up crashing, having had the insanity of becoming familiar with the heavens, domain reserved to the gods, and thus questioning our human limits, the delusions of grandeur that we cannot contain.

But Irene Zottola’s work also points to something interesting from a word perspective. The term “sky” (in Spanish “cielo”) has a connection with the term “chisel” and the idea of “Chisel”. This, because originally it has a connection with the Latin word which means “to cut” and itself with the term which designates something which falls, which comes from above and go down. His book testifies to this with all these pieces cut, then glued, these traces of scissors and tears.

And the painter Georges Braque wrote: “This is how the poet can say: ‘a swallow stabs the sky’, and makes a swallow into a dagger. ”