Dominic Lippillo – Stories We Tell Ourselves 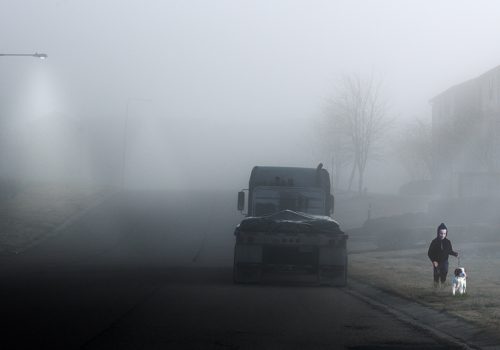 During my childhood I lived in fifteen different houses in the midwestern part of the United States – a part of the country that feels as placeless as the rental houses my family occupied. As a result, I have always felt like an outsider observing and wondering about the area I was inhabiting. Each time we moved I became fascinated and haunted by the residual essence of the former inhabitants that still lingered in and around the home.

Throughout my projects I often photograph in or around my personal surroundings in an attempt to understand the spaces and the people who once lived there. In doing so, I create photographs of experiences that exist in his mind but not in reality. I aim to create and capture fictitious moments, while subsequently calling into question the legitimacy of photographic representation by employing a practice, which utilizes staged photography, found vernacular photographs, and digital composite imagery in which I embellish the depicted information through a process of addition and deletion.

Throughout the series, “Stories We Tell Ourselves”, memory, landscape, and vernacular images, coalesce in a series of constructed photographs. Drawing influence from my experiences, American Scene painting, literature, and cinema; I seek out non-specific American landscapes to become settings that simultaneously feel familiar and unfamiliar. In doing so, I embellish the images by adding atmospheric conditions and appropriated figures that are alien to the melancholic landscapes.

I begin the process for this series by photographing unoccupied suburban and rural areas to serve as backdrops of the everyday. I then search through my collection of anonymous vernacular images – photographs with unknown internal and external contexts – that have been purchased in secondhand shops to find figures to inhabit the minimalistic scenes. In doing so, a pensive human presence appears as an rückenfigur contemplating the landscape for the viewer to identify with, or as a visual device to direct the viewer’s gaze around the frame. I approach finding the locations to photograph, and choose the figures to appropriate, with an eye for ambiguity and an irrational attraction and fascination to unassuming details, thus allowing my mind to wander outside of the confines of my eye’s visual field.

In these re-contextualized photographic realities, the landscapes and figures share a symbiotic relationship, which allows them to transcend time, space, and experience due to their juxtaposition. By creating composite photographs, I am inviting the viewer to impose new meanings and create their own re-telling’s of the stories intertwining the anonymous figures and unspecified locations.