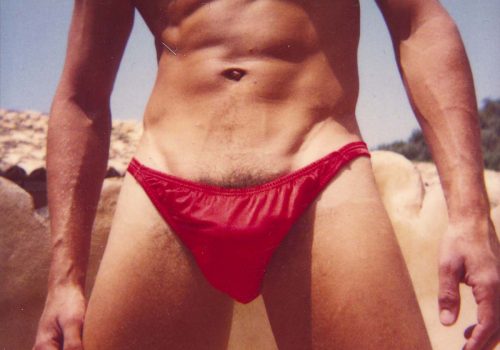 Daniel Cooney Fine Art presents a solo exhibition by Christopher Makos titled “Dirty.” A career overview featuring mostly unseen work from every stage of the artist’s life, Dirty features a selection of 40 vintage photographs, collages, and assemblages that celebrate the daring, decadent, and delectable moments of life with equal panache.

The works featured in Dirty reflect the advice Makos received while apprenticing with Man Ray in Fregene, Italy, at the outset of his artistic journey in 1976 – “Obey your instinct.” Possessed with the innate gift to fuse art and cultural artifact in a singular work, Makos came to the notice of kindred spirit, Andy Warhol, and the two quickly became lifelong collaborators and confidantes. Makos taught Warhol photography; Warhol taught Makos the business of art. Together the dynamic duo would travel the globe, enjoying the pleasures of mutual camaraderie.

Dirty illustrates the many facets of their storied relationship, and Mako s ‘ s ro le as an independent artist in the Fa ct o ry. Whether photographing Warhol and Christopher Reeve in conversation, or sharing a more intimate moment with Warhol lying face down on the studio floor while receiving a full body massage, Makos is the consummate insider, recording history as it unfolds before his very eyes.

Among the most significant works on view is Andy in Black Wig Contact Sheet (1981) , a remarkable series of portraits of Warhol wrapped in a white sheet and donning a vivacious bobbed wig, embracing the experience of posing and being gazed upon while exploring notions of gender, a project he did exclusively with Makos. Sexy but not sensational, Dirty is a love letter reminding us of all the exquisite pleasure of love, life, and art.

Makos is the author of 17 books including White Trash ( 1977), Wa rho l /M a kos In Context (2007), Christopher Makos Polaroids (2009) and Everything: The Black and White Monograph (2014). His work has been published in Interview, Rolling Sto ne , House & Garden, Connoisseur, New York Magazine, Esquire, Genre and People. His works have been exhibited at the Tate Modern, London, The Whitney Museum of American Art, New York, The Metropolitan Museum of Art, New York, The National Gallery, Washington, D.C., and The Guggenheim Museum, Bilbao.