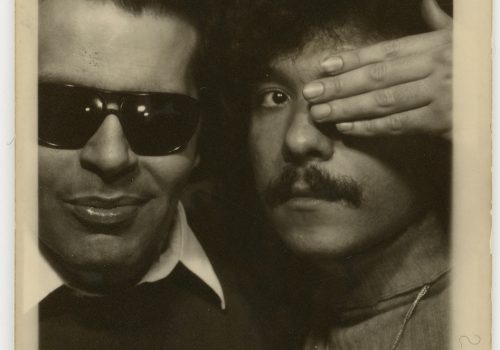 Born in Puerto Rico in 1943, Antonio Lopez remains one of the fashion world’s most important and remarkable figures from the 1960s to 1980s. At the tender age of seven, his family moved to New York, his adopted city, which would later become the giant stage for his creative work.

He studied at the Fashion Institute of Technology, where he met his partner, Juan Ramos, who had a profound influence on his entire oeuvre, supporting his creative production and his rise up the fashion ladder.

From the 1960s, Antonio Lopez worked as a fashion illustrator, and his drawings were published in magazines including Vogue, Elle, The New York Times, and Harper’s Bazaar. In New York, he collaborated with artists and publishers such as Andy Warhol and Diana Vreeland, then moved to Paris in 1969. Here, he worked with Yves Saint-Laurent and Karl Lagerfeld for some years and became an iconic figure on the Paris fashion scene, along with “Antonio’s Girls”.

Antonio became his eponym. Freed from the name of his family, he created his own. This family was also, in some ways, his court. It was attended by muses and models like Jerry Hall, Grace Jones and Jessica Lange, whose careers he advanced without them knowing. And countless friends, lovers and artists, who gravitated around him night and day,  doubles tasked with masking his solitude and relieving him of his shadow like Peter Schlemihl in Chamisso’s tale.

After returning to New York in 1975, he worked tirelessly on one advertising campaign after another, perpetuating the energy of this dazzling career until his sudden death finally brought it to an end at the age of just forty-four. Antonio Lopez died of AIDS on 17 March 1987, in Los Angeles, leaving behind a large body of work. His aesthetic and rhetorical statement would dissolve into the depths of art history.

Fashion was his subject, but also his pretext – his pretext to express beauty, sensuality, sexuality, life and time.

Because fashion, as Coco Chanel described it, “is not something that exists only in clothing. Fashion is in the air, borne upon the wind. We feel it. Fashion is in the sky, and on the street. “Antonio Lopez conveyed, embodied, lived fashion. It was a matter of attitude, and probably of life or death. For although death took him too soon, his entire body radiated life. A fiery, exhilarating, passionate, luminous life, always pushed to its peak by the vital force of his creative powers and a compelling need to search for something without ever really caring to find it.

Fashion was a pretext for Antonio to generate forms, but it was also a pretext to deconstruct languages in order to liberate their meaning, and to reconstruct his own, the “untranslatable body of languages”. Jacques Derrida