Visa pour Image 2020 / ESJ PRO : In the privacy of a pack of arctic wolves 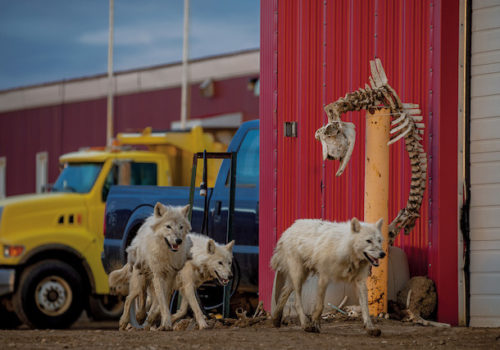 Ronan Donovan’s “Closer to the Wolves in the High Arctic” takes visitors to the edge of Canada-Greenland to meet white wolves. A series of photographs taken from inside the pack, as if the author were part of it, on display at Visa pour Image 2020.

Ronan Donovan was not happy with his previous series of wolf photos taken in the Yellowstone National Park. “If your subject is afraid of you, this fear is reflected in your photographs and the representation of the animal is distorted”, he explains in the introductory text of the exhibition, “As close as possible to the wolves in the Extreme Arctic ”at the Minimes Convent.

This is not the case for this latest exhibition, produced for National Geographic Magazine. The American photographer, a scientist by training, followed a pack of white wolves for three months. The animals show themselves without reserve. They almost seem to have completely accepted him, as the proximity in certain pictures is exceptional.

A name for every wolf

The photographer managed to capture all the moments in the life of the pack. Here, we observe wolves and cubs resting quietly. There, we see a wolf cub and his mother playing. In this other photo, the whole group is on a muskox hunt… Ronan Donovan was, during these three months, so close to this family pack that he gave them each a name. You can recognize them clearly as you go through exposure. Gray Mane, Bright Eyes, , White Scarf, Slender Foot and One Eye are immortalized in this fascinating exhibition.

They are not very fearful because they have never been hunted by humans. They have inhabited a remote land for 10,000 years, Ellesmere Island, this “other planet”, as he described it in the  Men’s Journal, on his return from this journey. “No trees, a frozen sea, a sun that never sets. The feeling of another world “.

Animals that you may never see again after the show. Unless, as he mentions on the social network Instagram while chatting with a subscriber, Ronan Donovan returns there “to see how the pack is doing”.

For those unable to travel, all the photos can be viewed here.