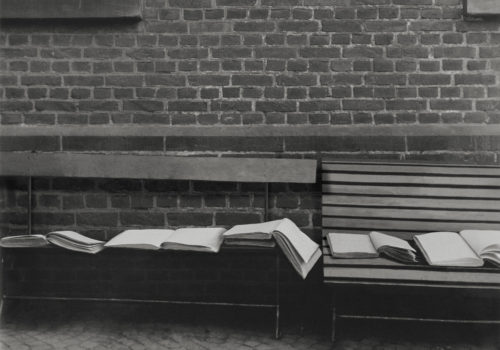 Ever since the medium was first invented, photography’s relationship with the real world has been as perplexing as it is fascinating. Far more than a medium such as painting, photography was supposed to have a certain level of truth. We know that Sander’s subjects are fixed. Anne Wilkes Tucker has noted that “only his single observation of each subject exists for us; frozen in stance and situation.” In recent decades, in particular, the idea has taken root that truth and reality are ambiguous concepts in photography. Somoroff explores this notion.

The digital revolution has brought the unprecedented potential for manipulation into focus. Through the use of software Somoroff has taken out what we have always believed to be the “essential element” – the subject, the portrait. The backgrounds, once a secondary fragment, now become the primary motivator. They have now been translated into new fully conceived images that rightfully belong to the “postmodern” idiom.

A line denotes many things in our understanding of symbols, meaning and relationships. A line can be the place one stands in hope of being one of those who receives, as well as the fear of being one who does not. A line drawn in the sand represents a moment of choice. A line represents a symbol of equality, a level playing field, a non-dimensional graphic object that shows in its simplicity the wholeness of human kindness. And, as such, is a moment of choice.

Two works can be connected by the line of thought that runs through them. August Sander’s work was one of great humanity. Michael Somoroff’s work is one of great humanity. These are works that define our perception, but not in the harsh manner of a dictator. Rather these are works that lead us all to view inside and to judge for ourselves. We are not given the luxury of having our thoughts formed for us. We must be diligent and courageous. And we must decide for ourselves, where we stand in reference to the line.