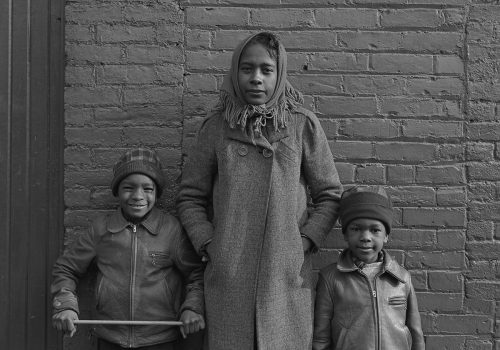 Todd Webb Archive was inspired to put together this online exhibition as a small gesture of solidarity with all those who have taken to the streets to protest in the past few weeks.

In the early 1940’s, Todd Webb was living in Detroit and working for Chrysler. During his time at the company, he became friends with a co-worker by the name Harry Callahan. The two of them were both members of the company’s camera club, an affiliation that would lead them to take a workshop with Ansel Adams. Long story short, the ten day seminar with Adams proved to be a pivotal experience for the two men; a catalyst that changed the course of their lives and reverberates to this day in the annals of photographic history.

Encouraged by Adams, Webb began to work with a large format camera, a shift that led to his early attempts at portraiture. The dozen images that follow represent Webb’s first foray into photographing people, something that would become one of his great strengths as an artist. According to his journal, the photographs depict a family in his neighborhood in Detroit with whom he became friendly with. In 1941 he writes:

“I walked by their house on a Sunday afternoon and two of the boys were on the porch and we said ‘hello’ as usual. I asked if I could make a picture of them and they said ‘sure’. I told them I would bring a print for each of them the following week. The negatives were about the best I had made up to that time. Next Sunday, I took the quite fine prints and gave them to the boys and the whole family was delighted and I learned a lot about them. There were twenty-five children with the same father and mother. They ranged from 32 to 4 years old. Nine of the boys were already in the Army. I made pictures of the family and we were all pleased. I sent a set to Ansel and he was delighted and told me that when I went east to boot camp I should stop in New York, take the pictures to An American Place, and show them to Dorthothy Norman.”

When Webb arrived in New York, he took Ansel’s suggestion and stopped in at An American Place. There he met Alfred Stieglitz who was impressed by him and his photographs of Detroit. They would remain friends until Stieglitz’s death in 1946.