Best Of 2021 : The Planches Contact festival, between spectral odes and visions of the future 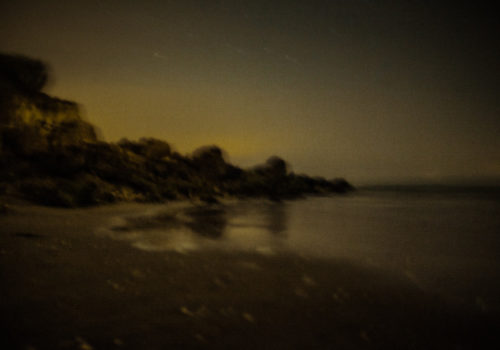 The Deauville photographic rendezvous gives pride of place to the tension of our world, both haunted by traces of the past and the uncertainty of a future increasingly intertwined with new technologies and our insatiable consumption.

For the first time, the “springboard” reserved for young emerging photographers did not take place in the space very open to the sea that is the “Point of view”, located very close to the beaches and bathed in soft natural light, but in a brand new location carried with a very important investment of the town hall: the Franciscans, an historic building – formerly an orphanage for young girls, then a clinic run by nuns – this brand-new cultural center offers a new setting for the festival and gives a more museum-like tone to the hanging, with a certain darkness maintained for the exhibited works.

It is nevertheless the light that guided the photographer Céline Croze during her trips in the night where she tried to catch the very particular mood of Deauville and its region, where she wanted to dialogue with the shadows that she met, always seeking a fragment of clarity in dark landscapes. This gives a deep and sensitive stroll tinged with a chiaroscuro less conventional than we might think and above all a form of attention to the disintegration of a world always stretched between several poles.

The death of the “imagier”

Like those present in the words that never cease to run on a large panel produced by Antoine d’Agata, often citing La Nausée by Jean-Paul Sartre and fragments of philosophical and literary texts which state revolutionary thoughts and clearly contrasting with the rigidity of the bourgeois houses of Deauville captured in multiple shots and put aside, as the saturation of a capitalist model denounced in what it has most cruel and brutal, this savagery where only money matters.

The tender views offered by Anne-Lise Broyer and FLORE seem surprising and out of sync, both celebrating yesterday’s literary figures whom they are particularly fond of, notably Françoise Sagan and Marguerite Duras. A writing by the latter inspired FLORE to make a film made with a camera of yesteryear, with soft images and as if frayed by the imprint of History, revolving around the inevitable melancholy that the dream of a romantic encounter supposes, in a rambling of feelings where the photographic style blows on a certain evanescence of things in life.

Not far from there, the Spanish artist Joan Fontcuberta, known for his photographic pranks, is anxious to question, almost in an opposite way, contemporary imagery, manufactured today by Instagram and Artificial Intelligence, with this vision of a hypothetical future: a software which would make it possible to make paintings himself from a pre-existing base, announcing the death of the painter and the picture-maker.

Fontcuberta, with his partner Pilar Rosado, thus exhibits these works of Artificial Intelligence, with surrealist accents like a painting by Roberto Matta, but not devoid of a certain aesthetic depth that doubly questions. When asked if this is a happy or regrettable prospect for humanity, the artist kicks in, admitting that he cannot take a position, but that he is optimistic and that this trend is often far from reality …

His work continues outside, on the way to the beach, where huge posters he designed tout an improbable amusement park in Spain for which he says he was commissioned, explaining that it is about creating the experience of a trip to Mars, with investors not at all embarrassed to ride the wave of mass tourism, blithely criticizing local environmentalists who want to prevent the project and announcing that soon direct flights will be created from Beijing. Beside him, festival director Laura Serani is quick to reassure us that this is indeed a joke.

If fiction is also the creative spring of SMITH, it is part of a very poetic vision, with an invitation to question our view of the stars. All the work of the artist, exhibited this summer at the Rencontres d’Arles, and that he carries out with a team completely convinced by the stake, is to praise the idea of ​​a new relationship to the cosmos while the latter is gradually absent from our perception of the world, our policies and our thoughts, or is always seen as a very distant entity and as if it was outside of us, with a disturbing, if not horrifying aspect. SMITH, who had a piece of meteorite implanted in his body, claims a connection to the stars. In this work done in Deauville, he imagines a shift to the year 2666 – horrible or miraculous year? – where our relationship to the natural elements could completely change, where we could rediscover, perhaps tragically, our connection to the celestial space.

He has thus designed an installation with the designers Diplomates, partners for three years on this project, on which we can lie in the same position as a cosmonaut in a space shuttle, and has developed a series of photographs taken with a thermal camera which are exposed near the sea in the form of panels in the open air. The orange-colored luminous halos present in the images come from the heat that emanates from the bodies, which, explains SMITH, does not distinguish between living beings visible on the photographic capture. Then comes this feeling that we can see souls, endowed with the same luminous spectrum as that of the moon and the sun, in pictures of a stunning aestheticism.