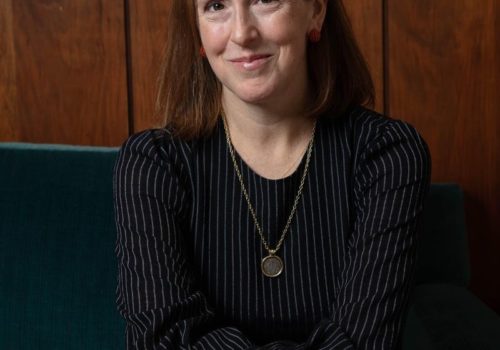 Aperture Foundation’s Board of Trustees announces that Sarah Meister has been selected as its next Executive Director. She will begin her new role in May 2021.

As Executive Director, Ms. Meister will serve as the primary creative force and public representative of Aperture, a nonprofit arts organization and preeminent publisher of photography, working closely with the Board and leading the staff of thirty-five to further the organization’s distinguished legacy and set its vision for its future. She will succeed Chris Boot, who will be returning to London after leading Aperture for the past decade.

“Sarah is an accomplished curator and esteemed voice in the photography community and the broader art world,” says Aperture Board Chair Cathy Kaplan. “We are thrilled that she will bring her deep and extensive knowledge and absolute passion for photography to Aperture. Her genuine leadership and scholarly achievements make her an exceptional choice to protect and celebrate Aperture’s history, while entrusting her with its next chapter.”

Ms. Meister will be responsible for directing strategic, operational, and financial planning; overseeing Aperture’s book publishing and flagship magazine, educational and outreach programs, and the Paul Strand archive; cultivating collaborations and partnerships with other institutions, nonprofit organizations, and donors; developing Aperture’s diversity, equity, and inclusion initiatives; and continuing to grow its global audience. She will report to the Board of Trustees.

“Photography is inarguably central to our contemporary experience,” says Ms. Meister. “I look forward to working with the brilliant team at Aperture to continue to encourage the medium’s capacity to promote understanding and justice, and to partner with artists in whose hands photography serves as an enduring source of inspiration. For nearly seventy years, Aperture has been a touchstone for all who care about the medium, grappling with its ever-changing nature and embracing its expansive, democratic spirit. I am honored to play a role in furthering its essential position in the field.”

Sarah Meister is currently Curator in the Robert B. Menschel Department of Photography at the Museum of Modern Art, New York, a position she has held since 2009. She has spent over twenty years of an exceptional career at MoMA, organizing a range of critically acclaimed exhibitions, publications, and public programs and securing a wide array of landmark acquisitions for the museum’s collection. She is the lead instructor for the popular online course “Seeing Through Photographs” (offered on Coursera), and is codirector of the August Sander Project, a research initiative hosted by MoMA and Columbia University. The project’s fifth and final gathering will take place in September 2021.

“Aperture . . . has become a platform for redefining the notion of image-making in a more inclusive America, and then placing that alongside a global conversation,” said noted Board member Dawoud Bey, whose work will be the subject of a retrospective at the Whitney Museum of American Art later this year. He adds, “Chris Boot has done an extraordinary job at rebuilding Aperture’s relevance and vitality under his tenure, and Sarah’s appointment will keep the field energized and excited about Aperture in the best possible way.”

Ms. Meister’s appointment follows an international search led by the Board’s Search Committee, which was chaired by Ms. Kaplan and Board members Allan Chapin, Michael Hoeh, and Lisa Rosenblum, together with Pamela Bol Riess, Founder and CEO of PBR Executive Search, which for the past twenty years has focused exclusively on conducting executive leadership searches in the nonprofit sector.

Aperture is a nonprofit arts institution founded in 1952 by a group of photographers, editors, and educators, including Ansel Adams, Dorothea Lange, Barbara Morgan, Beaumont Newhall, Nancy Newhall, and Minor White. Their vision was to create a quarterly magazine as a common ground for the advancement of photography. Before long, Aperture began publishing books, among them iconic monographs by Diane Arbus, LaToya Ruby Frazier, Nan Goldin, Deana Lawson, Sally Mann, Richard Misrach, Stephen Shore, and many others.

Throughout her career, Sarah Meister has built a reputation anchored in curatorial excellence and distinguished by a generous, collegial spirit. Her highly acclaimed Dorothea Lange: Words & Pictures (2020) was recognized as one of the best exhibitions of 2020 by the Washington Post, and in its virtual form as one of the top ten online exhibitions of 2020 by Smithsonian Magazine. Its accompanying catalogue brings a range of contemporary voices into dialogue with Lange’s work, including artists Julie Ault, Sam Contis, Sally Mann, and Wendy Red Star, and critical thinkers Christina Sharpe and Rebecca Solnit, among others. Equally lauded is her Gordon Parks: The Atmosphere of Crime, 1957 (with contributions from Nicole Fleetwood and Bryan Stevenson; published by the Gordon Parks Foundation and Steidl, 2020), inspiring an installation currently on view in the Museum of Modern Art’s Fourth Floor Collection Galleries.

Forthcoming projects that she has led include Fotoclubismo: Brazilian Modernist Photography, 1946–1964 opening at MoMA in spring 2021 with an accompanying catalogue, which will introduce the achievements of a São Paulo–based amateur photo club to an international audience. She is contributing essays to the forthcoming publications Fotografia moderna no Brasil? Fragmentos de uma história, 1900–1960 (Instituto Moreira Salles), as well as the catalogue accompanying a major solo exhibition featuring Gertrudes Altschul for MASP (Museu de Arte de São Paulo Assis Chateaubriand). Also this year, another exhibition organized by Meister, Masterworks of Modern Photography 1900–1940: The Thomas Walther Collection at The Museum of Modern Art, will open at MASI (Museo dʼarte della Svizzera italiana) in Lugano, Switzerland, and travel to Jeu de Paume in Paris and Camera (Centro Italiano per la Fotografia) in Turin, Italy, again with an accompanying catalogue.

Some of Meister’s other notable exhibitions at MoMA include Making Space: Women Artists and Postwar Abstraction (cocurated with Starr Figura, 2017), From Bauhaus to Buenos Aires: Grete Stern and Horacio Coppola (cocurated with Roxana Marcoci, 2015), and Bill Brandt: Shadow and Light (2013). In addition, Meister is an author and editor of numerous publications, most recently Frances Benjamin Johnston: The Hampton Album (2019), Arbus Friedlander Winogrand: New Documents, 1967 (2017), One and One Is Four: The Bauhaus Photocollages of Josef Albers (2016), the three-volume Photography at MoMA (with Quentin Bajac et al., 2015–17), and a series of publications with Maira Kalman and Daniel Handler (2014–16). Other published essays consider the work of Luigi Ghirri (2020), Hank Willis Thomas (2019), Jan Groover (2019), Dorothea Lange (2018), Nicholas Nixon (2015), Walker Evans (2012), Sabine Hornig (2006), Michael Wesely (2004), and Rudy Burckhardt (2002).

Meister’s articles for Aperture magazine have featured Horacio Coppola (2013), Regina Silveira (2014), and the Club Fotográfico de México (2019). She contributed to the Aperture publications The Photographer’s Playbook (2014) and the forthcoming Photo No-Nos (2021). In fall 2020, she served on the shortlist jury for the Paris Photo–Aperture Foundation PhotoBook Awards and moderated a conversation around “The Enduring Legacy of the Zealy Daguerreotypes.”

The ARGENTIC gallery is closing