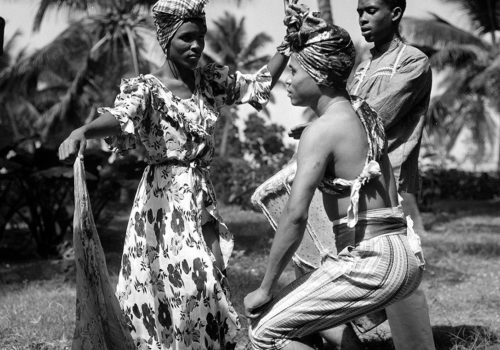 A life-time spent documenting the world

From the 1950’s to the 1970’s, Hélène Roger-Viollet travelled the world with her Rolleiflex camera. America, Asia, Africa… As the eldest daughter of the French engineer and amateur photographer, Henri Roger-Viollet, Hélène grew up among her father’s photographic experiences. In 1938, after studying journalism, she founded the Roger-Viollet photo agency with her husband Jean Fischer.

Her trips were an excuse to complete, document and broaden the existing archives.

Hélène Roger-Viollet didn’t look for the extraordinary but she testified, through her square shape photographs, about the daily life and customs of people living in foreign countries, as would an ethnologist, at a time when it was not easy to travel. The photographer said in a documentary film made in 1981, “we did not do reportage but created documents to broaden our collections”.

Taking photographs for 30 years, Hélène Roger-Viollet established a work that combines the informative testimony and her personal aesthetics.

She died tragically in 1985 at the age of 84, assassinated by her husband. The collection of photographs was then bequeathed to the City of Paris and is now housed at the Bibliothèque Historique de la Ville de Paris.

From February 12 to April 3rd, 2021, come and see these photographs exhibited for the first time at the Roger-Viollet Gallery (6 rue de Seine 75006 Paris).

History of the Roger-Viollet Collection

Bequeathed to the City of Paris in 1985 by its founders (Hélène Roger-Viollet and Jean Fischer), the Roger-Viollet photo agency is an international reference in terms of photographic archives. Its collections constitute a unique ensemble in Europe, counting over 6 million documents. Mosaic of very varied historical testimonies, these images relate the history of photography, from the productions of famous photography studios during the Second French Empire to the photojournalism of the late 20th Century.

The historical collections of Roger-Viollet have been completed for over 15 years by partnerships with:

– the greatest archive agencies in the world, some of them previously unseen in France

– the collections of the French newspaper «France-Soir », exclusively distributed by Roger-Viollet

In order to perpetuate history but also because the photos of today are the photos of tomorrow, the Roger-Viollet agency keeps on looking for unexploited collections of images. Added to its own collections, the agency distributes the work of many photographers, allowing them to ensure the continued existence of their photographic production and increasing its value.

Thanks to Dominique Lecourt who is the architect of this day.

“Involved in the distribution of archival photographs since 1984, Dominique Lecourt began working in various press agencies and laboratories. He was a freelance photographer until 1997, when he joined the Roger-Viollet Agency. He participated in the implementation of digitization and the launch of the roger-viollet.fr site. In 2003, he created the editorial department, whose objective is to develop partnerships with new photographers, to disseminate, tell and promote all of this iconographic heritage, from the beginnings of photography to the present day, through various exhibitions. and publications according to current events. ”