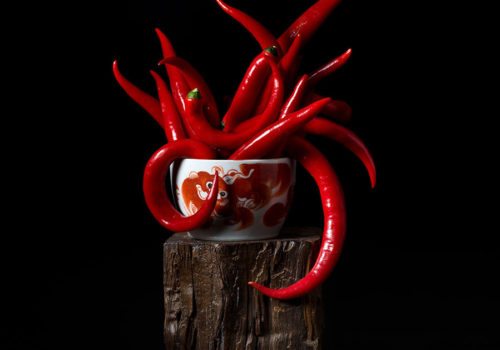 Robert Klein Gallery, in partnership with M97 Gallery,  presents a new exhibition of photographs by New York and Shanghai-based artist and designer Han Feng. The exhibition will be on view from January 18 through March 13, 2021, at Robert Klein Gallery and online. The exhibition, entitled The Gift, presents a series of 20 artfully and poetically conceived still life photographs, created over the last year in her New York City studio during the pandemic.

A celebrated fashion and costume designer, Han Feng began working in photography several years ago when colleagues and friends complimented her on her eye for the medium and challenged her to pick up a camera. A close friend, American photographer Lois Conner, helped her learn the fundamentals of the camera, and before long she was making landscapes in her hometown of Hangzhou, China. When the pandemic hit, she turned to combining meaningful and ephemeral objects from her kitchen and studio in New York. Conner as well as other artists and curator friends quickly noted that she had found her photographic voice.

The Gift marks Han Feng’s first exhibition of her fine art photographs. The title of the exhibition comes from her love of ceramics, cuisine, and photography. All the fruits and vegetables in the images were sourced from local specialty and farmers markets in New York City. The ceramic objects and sculptures used in her photographs are gifts from artists around the world as well as pieces from her private collection. “The earth gives us these beautiful even ordinary things,” she says, referring to the food objects in her pictures. “I love to share them with friends, I really feel like they are a gift.” Intimate dinner parties she hosts at her studios in New York and Shanghai build on classic Chinese dishes often with an international fusion, much like her still life assemblages.

“During this strange period, I was looking at the many stones, rocks, sculptures, vases, and antiques I have collected from China and the U.S.,” says Han Feng. “I began to assemble them and create a small stage on a family table that’s over 100 years old. It was almost like making a Chinese soup with lots of ingredients. Other photographers, artists, curators, and friends were very positive about the work, and it really touched me and encouraged me to keep going. There is often a fragile moment where there is the chance that all the objects could fall down and sometimes during a shoot they would. There is a lot of surprise, fun and joy in the photographs.”

Han Feng grew up in Nanjing and Hangzhou, China, and received her education from the prestigious China Academy of Art in Hangzhou in the early 1980s. She moved to New York in 1985 and launched her first ready-to-wear collection at Bryant Park in New York in 1993. She made her costume design debut with Anthony Minghella’s Madama Butterfly at the English National Opera, London, and the Metropolitan Opera, New York.

Han Feng’s clothing, design, and art installations have been featured in major exhibitions at the Victoria and Albert Museum, London; Neue Galerie and Cooper-Hewitt National Design Museum, New York, among others.

Han Feng finds inspiration in her exploration of highly-refined textures, materials and craftsmanship. She has long been a champion and collector of contemporary Chinese art, collaborating closely with many artists on exciting discoveries to combine art and design, leading up to the opening of Han Feng Art Space in Shanghai in November 2017. She lives and works in New York and Shanghai.