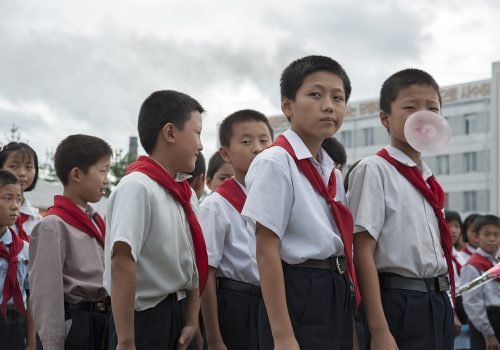 A journey to another world, which when crossing its border transforms you into a visitor of the weird, can only be that of North Korea. Officially “Democratic People’s Republic of Korea”, this country is the most secret state on the planet. Led since 2011 by Kim Jong-un, son and grandson of the previous leaders, the nation’s official doctrine is Juche, based on autocracy and self-sufficiency whether military, economic or political. And that’s about all we can say for sure about this country …

Le Grand Mensonge (The Big Lie) is a projection into the absurd, a ballad into the unreal or the real, an ironic metamorphosis of North Korean daily life. This book is a photographic fable, a nonsense full of meaning, a satire of the true false, a visual poetry which changes the norm and which suspects Pyongyang of taking you for a ride.

Le Grand Mensonge (The Big Lie) offers both a dive into official North Korea and a fun “search and find”. What detail did Didier Bizet add to each photo to highlight an absurd law or one of the lies of which are victims North Koreans and visitors? These photographic manipulations ironically question the truth: is it official or fantasized? How far does the absurdity of a society completely locked in? Behind this great masquerade with benevolent decorations, where is the fabrication? This book, enriched by a conversation with Guy Delisle, author of Pyongyang (The Association), takes you to “the country where everything is true but false”.

Didier Bizet worked for many years as an artistic director for international clients in advertising agencies in France and abroad. In 2015, he devoted himself only to photography and joined the Hans Lucas studio. His attractions go to the former countries of the Soviet bloc “Where melancholy can be compliantly photographed”. Between personal and documentary photography, photography is for him a real learning process about the environment. Didier Bizet graduated from the École Nationale Supérieure des Beaux-Arts and graduated in art history. His reportages are published in the international press and received, in 2020, the Sony Award (second prize, documentary) for his Baby-boom series, published numerous times in France and internationally and screened in 2020 at Visa pour l’image.