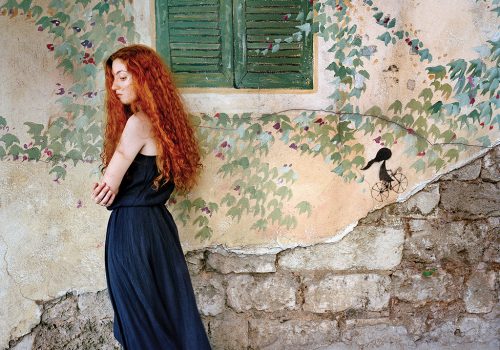 As a Lebanese-born American woman and mother, my background and cross-cultural experiences inform my art. I have dedicated my work to exploring issues of personal and collective identity through photographs of female adolescence and womanhood – both in the United States where I live and the Middle East where I am from.

I am interested in what it is like to be a young woman today, in a world that poses endless questions on girls and women. In SHE, I am focusing on young women – the ages of my daughters – as they enter adulthood. I want to portray the raw beauty of their age, their individuality, their physicality, their mystery, and the organic relationship they create with their larger environment. I want to photograph them, the way I, a woman and a mother, see them: beautiful, alive. The process is about collaboration and empowerment, and the photo session always evolves organically as the young women become active participants in the image-making process.

My work addresses the states of ‘Becoming’ – the beauty and the vulnerability of growing up – in the context of the visceral relationships to our physical environment and universal humanity. By collaborating with women in the United States and in the Middle East – and while still looking to reveal the individuality of each young woman – I focus on our essence, our physicality and the commonalities that make us human, ultimately highlighting how female subjectivity develops in parallel forms across cultural lines.

Born and raised in Lebanon, Rania Matar moved to the U.S. in 1984. Originally trained as an architect she currently works full time on her personal photography projects and teaches at Massachusetts College of Art and Design. Her work focuses on women and girls in the U.S and in the Middle East, with an emphasis on identity and universality.

Matar has received several grants and awards including a 2017 Mellon Foundation artist-in-residency grant at The Gund Gallery at Kenyon College, a 2011 Legacy Award at the Griffin Museum of Photography, 2011 and 2007 Massachusetts Cultural Council artist fellowships, first place at the New England Photographers Biennial and Women in Photography International. In 2008 she was a finalist for the Foster Award at the Institute of Contemporary Art/Boston, with an accompanying solo exhibition. Her work was recently selected as one of the 10 Remarkable Photographers to Discover at This Year’s AIPAD Fair.

A mid-career retrospective of Matar’s work is currently on view at the Amon Carter Museum of American Art, in a solo exhibition In Her Image, December 2017 – June 2018.

Matar’s images are in the permanent collections of several museums, institutions and private collections worldwide.