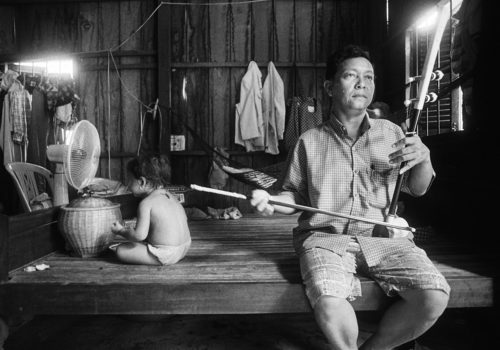 Dey Krahom (Red Earth) is a series of images that tell the story of a unique community of artists, performers and musicians before they were forcefully evicted from their homes to make way for a new development in Phnom Penh, Cambodia. Over 800 families lived in homes built from scraps of metal and wood on marsh land that was filled in decades ago with the typical red earth of Cambodian soil, giving it its name. The village flourished around the National Theater and the White Building, architectural icons of the 1960s urbanism revival which have since been demolished. It was populated by people involved in bringing life to the theater, many of whom are considered masters of their art.

The National Theater had suffered significant damage in the 90s from a fire and since then many of the artists had little work. Their situation made worse by the country’s struggle to recover both economically and culturally from the devastation of war and Khmer Rouge genocide when 9 out of 10 artists were executed. In 2003, I spent months visiting the village and creating portraits of its residents. I was invited into people’s homes to see pictures of their performances and the awards that they received. With pride, and great skill, they demonstrated their cultural talents. It was in that same year that the struggle for ownership of the land began. In the next several years the village emptied out and eventually the last standing individuals left in 2009.

Dey Krahom is a rare look into the lives of Cambodian artists whose work is essential to preserve cultural traditions and to pass it on to the next generation. It is the story of individuals who have survived genocide, and have faced challenges like poverty and land-rights with resilience and the power of their art.

Born in 1976, Dana Langlois lives with her family of four and works in Phnom Penh.

She moved to Cambodia in 1998, after completing her studies in photography and fine arts. Fascinated by the texture and surprises associated with the use of film, she worked with analog black and white photography.

In 2000, she founded Java Creative Café, which she still runs. For over 20 years she has worked with Cambodian and Diaspora artists in a time of intense creativity and reconstruction that followed the tragic destruction of the country’s cultural identity. She produced hundreds of exhibitions and made many artists known through her structure. From 2008 to 2014, she founded and directed Our City Festival, a nation-wide art and urbanism festival.

She is currently artistic director of Creative Generation (2017) and Java Creative Café, formerly known as JavaArts (2000).