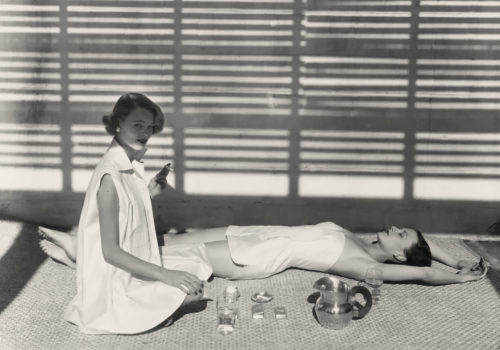 This is the seventeenth installment of the online series by Peter Fetterman Gallery called the Power of Photography highlighting hope, peace and love in the world. We invite you to enjoy and reflect on these works during this time.

Horst was one of the greatest fashion photographers of all time. He originally studied architecture in Hamburg and served as an apprentice to Le Corbusier in Paris but then switched to photography with the help of his friend and mentor George Hoyningen-Huene, a fashion photographer working for Vogue. Horst soon followed in his peer’s footsteps and in 1935 succeeded Huene as head photographer at French Vogue.

This is my favorite photograph of his, shot in his house at Oyster Bay in Long Island that he built and designed himself. It became a celebrated salon, where all the talents of that time came to stay and visit. People like Salvador Dali, Chanel, Noell Coward and everybody who had a true creative spirit in them were welcomed by Horst.

This image has such a sense of sophistication marked by Horst’s genius for lighting and mood.

Ted was much admired in his time. One of the standout photographers in Alexey Brodovitch’s Design Lab he captured New York in all it’s dynamic energy. I think of him like a great Jazz Musician or an Abstract expressionist painter. Nothing is ever predictable in his images. You never quite know what to expect and are kept on your toes.

Steichen included him in two important shows at the Museum of Modern Art. This is generally regarded as his greatest image. You just get caught up in the horizontal blur of the passing vehicle against the cinematic backdrop of lit buildings. He often used multiple exposures, restraining the camera shutter to allow maximum captured movement.

No less an artist than Bob Dylan chose this image to be the cover of his great album “Modern Times” which Rolling Stone declared one of the greatest albums of all time. Ted was a tall bear of a man with a heart of gold.

In 2003, a year before he passed away, Henri Cartier-Bresson opened his Foundation in Paris with an exhibition, “My hundred favorite photographs.” Photographs that he had seen that had moved him throughout his life. He included this image by Gianni Berengo Gardin, one of the great Italian post war photographers. To be blessed by Cartier-Bresson is like being blessed personally by the Pope if you are Catholic. In a way it is more Cartier-Bressonesque than a Cartier-Bresson, but has its own uniqueness. I was honored to have been invited to the opening, a very emotional evening as Bresson passed away the following year and this was the last time many of us saw him. This photograph has haunted me ever since. It is a masterpiece of composition with its multiple levels of storytelling. The presence of gazes within gazes, frames within frames just holds the viewer with its gestures of common humanity.

There is no one quite like Sarah. She is in a class of her own. She has many imitators but there is no one out there who can create a universe that flows with beauty and dreams as well as she does.

She started out a model and with dedication and hard work slowly built an esteemed reputation where every designer of note clamored to get her to collaborate with them and add that indefinable magic to their creations.

You know you are in the presence of someone truly unique when you sit with her in her dreamlike house in Paris. The first time I visited I could not believe I was in a house in the center of Paris.
I felt I had been transported to a quiet sanctuary in the heart of a Lewis Carrol countryside, a place where imagination and ideas roam free.

Brett Weston seemed destined at birth to become one of America’s most prolific photographers. Born in 1911, the second son of photographer Edward Weston, Brett had a camera in hand by the age of thirteen. A lot of people assume that Brett merely followed in his father’s footsteps into a career as a photographer, but that’s far from true. From the late 1920’s until his father’s death in the 1950’s, their careers ran parallel to each other’s. Brett in fact first discovered the Oceano Dunes, where he would later take his father to create some of the elder Weston’s most significant work.

Brett appreciated how the camera could transform subjects and how the contrast of black and white further altered the recognition of a subject. Thus, it is not difficult to understand his tendency to abstraction, a characteristic that would remain an important aspect of his work for his almost seventy year career. Brett didn’t concern himself with subject matter as much as he did with form and light. He could turn the mundane into the magical and the most ugly of subject matter into beautiful photographs.

“Reeds, Oregon” is one of Brett’s most lyrical photographs. The vertical arrangement of lines appears to be a musical score, which makes your eye dance around the surface of the photograph. The image has no focal point; rather the whole photograph becomes the focal point. You appreciate the photograph not for the subject but rather for what it truly is, a tangible object of beauty to see and hold.

I’m not quite sure I believe dear Gianni. His modesty is not false. But It takes someone with a special talent to create an image like this which I have never stopped thinking about since the first day I saw it. A simple shot of a family taking a quiet moment on a Sunday stroll in the 1950’s on the Lido in Venice.

It is much more than that. It is a great novel about a marriage and relationships. It is a powerful piece of cinema in the great Neo realist Italian Cinema tradition. It is all of these things and much more. But most importantly it is an honest portrayal of the human condition. A work of art.

I have never thought of Don Manuel as just a photographer. To me he has always been one of the great 20th Century poets whose pen was his camera. His images are lyrical poems. Even his titles are poetic. “The DayDreamer,“ “Daughter of The Dancers,” “Bicycles on Sunday,” “Good Reputation Sleeping.” But none so more than this image, “What a small world”.

I have looked at this image for so many years. It has haunted me for as long as I can remember. It has so many layers of story telling that the definitive meaning has always eluded me which is a sign of its greatness. Perhaps it can never be fully revealed which is fine too just like a great novel cries out to be reread again and again.

Two people pass each other on a deserted city street. The woman is walking slowly almost making an offering while the man walks in great stride. Though their paths may cross their lives do not connect. A fleeting city encounter showing the ambivalence of modern urban life. Perhaps he is leaving on a long journey. Perhaps the white sheets symbolize a far flung adventure by boat. What if they had indeed met and connected how would their lives have turned out? We shall never know…

I cannot believe it was 45 years ago as a youngster I first saw Bruce Springsteen in London playing at the Hammersmith Odeon. What a night! As a quiet Englishman I had never experienced such drive and energy on stage. Wow is this what America is like I thought to myself? I’m sure that planted a seed in my brain that I must go and live there and that I too was born to run away from all I knew to explore a new world.

Well flash forward here I am.

Music of various kinds has always been a big part of my life as I am sure it is for all of you.
I have always felt that there is a common connection between the greatest photographers and the greatest musician/composers/performers. It requires the same self-discipline and perfection of craft.
With Bruce Springsteen I always feel he writes in images. This was confirmed by his wife Patti Scialfa when she came to visit the gallery a few years back to buy her husband a photo as a gift.
“He loves photography,” she told me.

It’s a big week for Bruce and Patti with the release of the profoundly moving album and documentary, “Letter to You”. He meditates on all the big questions great artists grapple with – loss, youth, aging, family, friends, memory, death and hope.

Well I don’t think the great 20th Century British photographer Norman Parkinson had too many problems this day. This session was in a way the “perfect storm”. Here you have one of the greatest gifts to the camera in the history of photography, Audrey Hepburn, blessed with the sublime combination of beauty and vulnerability and “Parks”, one of the most skilled practitioners of his craft, whose sense of humour and charm and height relaxed everyone before his lens.

This special image was shot at the Villa Rolli, just outside of Rome, where Hepburn was filming “War and Peace” with her husband Mel Ferrer. It also helped that Audrey was dressed in one of the greatest creations of her favorite designer, Givenchy.

It is difficult to top this image, right?

Sarah knows a lot about beauty as all great artists do. She lives with it and breaths it and dreams it. She understands how hard it is to capture and how illusive and fragile it is. Here she has created something so exquisite and ethereal. The genius here was to shoot her subject behind. This serene composition worthy of a John Singer Sargent or Degas or a Mary Cassatt is unique in it’s own way.