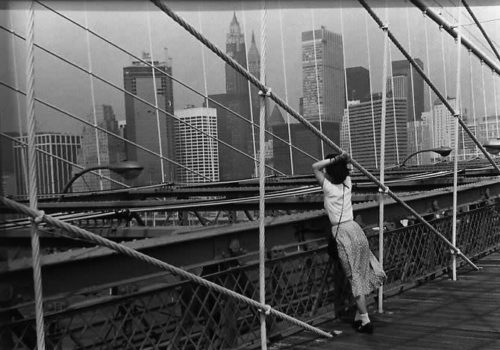 This is the eleventh installment of the online series by Peter Fetterman Gallery called the Power of Photography highlighting hope, peace and love in the world. We invite you to enjoy and reflect on these works during this time.

I love images of hope, especially now.
One knows this young woman will succeed in anything she sets her mind to, swept up by the energy and spirit of what Steiglitz himself called one of his own great photos, “The City of Ambition.”

I remember vividly my first trip to New York from London. I was a young student and had struggled to get the air fare together. I got on a bus from the airport and as we approached the city at night with that amazing skyline I thought I had died and gone to heaven.
I immediately heard Gershwin in my head.
I was just so excited to be there.
This is one of my most favorite NY images. Croner was a student of the Alexey Brodovitch Design Laboratory whose students over the years ran the gamut from Richard Avedon to Diane Arbus.
Croner was experimenting off the cuff that night on Central Park South and produced something truely innovative. Whenever I look at this image it always evokes that first encounter with that energizing city.

Backstage at the Folies Bergeres, 1960

Jean Philippe is one of the great least known French classic photographers who came to prominence in the 1950’s. He travelled the world as a skilled photo journalist working for magazines like “Realities.”
Settling back in Paris, he created a great body of work capturing the city he loved. This image of life backstage at the celebrated Folies Bergere could only have been taken by a Frenchman. It is the essence of nonchalance.

It’s not often I see a single image that drives me to seek out and meet the creator behind it. But such was the case with this extraordinary image. It immediately struck me as one of the most romantic, tender, mysterious almost “film noir“ images I had ever seen. Brassai eat your heart out.
How come I had never heard of its maker? Then I remembered a good photo publishing colleague had mentioned his name to me a few years back. I must have been rushing from one art fair to another and I had never followed up. Shame on me. I guess things sometimes slip through the cracks. But I believe in fate and that when things are meant to be they are meant to be.
Well off finally I went to San Francisco to meet with Fred in his studio and wow I realized I had just entered Aladdin’s Cave. I think Fred was just a spring chicken of 85 years old at the time but his enthusiasm and energy were contagious. Not to mention the intelligence and wit and charm. Wow I thought he was Cary Grant with a camera!
But it was the quality of the work that bowled me over. Great image after great image evoking a lost era of style and sophistication and heart and beauty that is unlikely to come back. And that special San Francisco light. No one has such an archive of superb work inspired by this unique city.
Fred is not just a humble, truly great and important photographer but a very special one-of-a-kind, gracious human being. A rare breed.

Myra Wiggins was a pioneer photographer who established herself as a much respected turn of the century artist.

Apparently she was a 5’1’’ dynamo, full of energy and determination, who garnered the attention of the great photographer and impresario of the arts, Alfred Stieglitz, who invited her to be part of his Photo Secession movement.

Her skill at lighting and composition was also noted by the burgeoning Eastman Kodak Company with whom she collaborated in a series of special advertisements for their new products. Which were beautiful tender artistic images in themselves.

“The subtle charm of art, the invigorating influence of active recreation, the joys of delving in the mysteries of chemistry and unveiling it’s photographic secrets. All or any of these are in store for the KODAKER. In them is the WITCHERY OF KODAKERY.”
Eastman Kodak advertisement
Ladies Home Journal. 1900.

W. Eugene Smith, by all the accounts I have read and knowing people who new him, was one of the most intense, driven, fanatical, impossible, genius photographers of all time. His work has always been a touchstone for me and I sought the great prints out wherever I could.
This image is one of them. Dr Albert Schweitzer, the Noble Peace Prize winner, was as equally passionate and driven in his life. A highly skilled medical doctor, a well practiced and revered musician, he seemingly did the impossible as a pastor and founder of a hospital complex in Lambarene in French Equitorial Africa to help the poor and disenfranchised. I knew quite well a celebrated English actress who when she was younger had voluntered to help him for a year having been moved by his selflessness. The stories she told about him have never left me…His deeds and words resonate now especially – “The purpose of human life is to serve and to show compassion and the will to help others.”
This image is part of Gene Smith’s last great photo essay for Life Magazine and one of his greatest prints I have ever seen. The perfect combination of subject matter and artist resulting in a vision of human humility and purpose.

One of the most beautiful fine art books ever produced in the history of photography is from photos captured by the great Doris Ulmann. She is most famous for her documentation of the Rural South but was also celebrated for her great portraits of prominent intellectuals, artists and writers.
Paul Robeson was one of the great renaissance icons of the last century. An all American professional athlete, writer, multi lingual orator(he spoke 15 languages), lawyer and basso profound concert singer and actor who was also noted for his wide ranging social justice activism.
As he once said, “As an artist I come to sing, but as a citizen, I will always speak for peace and no one can silence me in this.”
Another perfect pairing of artist and subject. When I saw this rare, exquisite platinum print I had to stretch for it for I knew I wouldn’t see it again.

Henri Cartier-Bresson operated on a level of intelligence and insight more than any other photographer I have ever met. He was just on another plain, analytical but so human at the same time. I have always thought the work he did in the USA from the end of the 1930’s to the end of the 1960’s produced some of the greatest least seen images of his career none more so than this heartfelt piece taken on the fly in Mississippi.
He was not particularly interested in landscape per se preferring to observe the human condition, the everyday moments of human interaction that reveal everything, the body language, the gesture.
But his was not a cold, cultural distancing stance. He brought everything he was as a well educated, sophisticated European to try and understand the power and beauty and the hope and despair that is part of this multi-layered complex country. Issues we are all still wrestling with now, so many years later.

To stand on the summit of the Mount of Olives as I first did so many years ago seeing this ancient city stretched out before you is one of the most inspiring views in the world. One takes in three millennia of history, beauty and pain. It is the soul of humanity. Spiritual home to three major religions, Judaism, Christianity and Islam.
Felix Bonfils is considered one of the most important figures in the development of photography in the Middle East.
May this city’s magical light spread it’s glow for world peace in these troubled times and the new hopefully enlightened era to come.

During the 1870’s, the Austrian born Baron Von Stillfried was one of the leading foreign photographers in Yokohama, a primary port for trade and tourism.
This is an interesting studio composition where the scratches in the negative simulate rain and the impression of wind is created by means of the geisha’s kimono being pinned against the studio backdrop.