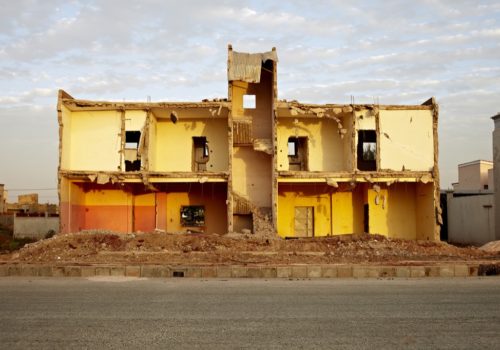 For its first  participation at Paris Photo, Galerie Cécile Fakhoury is presenting a solo exhibition by the Franco-Ivorian artist François-Xavier Gbré. Composed of a selection of his photographs made between 2011 and 2015 in West Africa, it brings together an installation of eighty-five small format photographs about the evolution of the city of Bamako, two large landscape prints, and one interior view. On the exterior of their stand, a “trompe l’œil” wall of an industrial wasteland reminds us that the work of this photographer weaves links between continents.

One wall is composed entirely of details, wide views, and material landscapes. The installation reveals the artist’s mapped vision in which he links the spaces, the monuments, the memories between the images. On January 20, 2012, the Malian army celebrated its 50th anniversary and officials inaugurated the Avenue des armées with the great sounds of national fanfare for the occasion. The Avenue des armées is symbol of a powerful military force, since monuments and signs of victory are made evident. Paradoxically though, since Mali entered into one of the  darkest periods of its history. Fifty years after independence, the African states write their memoirs through an aesthetic that is often taken from foreign inspiration.

François-Xavier Gbré gives us other histories of places that he has crossed, in frontal and large format photos. The apartment of the director of Porto-Novo’s former National Printing Office in Benin is  testament to a splendor that was not immune to abandon. This photograph captures the instant before the property loss. Next, a round trip around the exterior, with a shot of Ségou, the sandy landscape from which an empty wall seems to be sculpted. It is a narrative where the earth is red, the wall is dust, and the Harmattan blows, creating mystery. François-Xavier Gbré’s work gives an account of the other, the hidden, where space and time stands still.

Another sequence opens with a boldly colored building, taken in full light. By the roadside, this gas station in a  disuse state  becomes a contemporary archive of West African construction.

From the colonial vestiges in landscapes redefined by current events, François-Xavier Gbré’s work is a testament to a memory in touch with time and geography. His research of the land, urban transformations, and evolution of shapes in the architecture verge on an exploration that is simultaneously aesthetic, historical, and social.