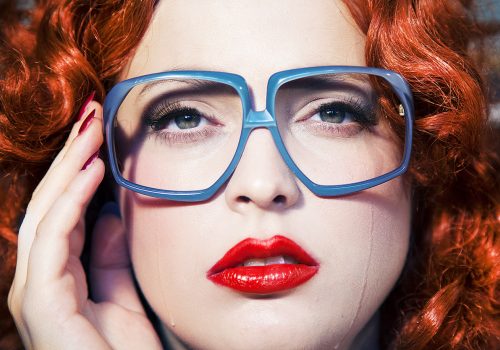 Fundacion Municipal de Cultura del Ayuntamiento de Valladolid presents the big solo show of the photographer Nadia Lee Cohen. An artist internationally acclaimed by public and critics since her inclusion in the prestigious Taylor Wessing Photographic Portrait Prize in 2012; where her work was on show at the National Portrait Gallery in London.

Nadia Lee Cohen (United Kingdom, 1990) is a photographer, filmmaker and self-portrait artist based in Los Angeles (USA), a city that has inspired her since her first trip in 2014; and that feeds her endless fascination with Americana and conventional life in suburbia. It is, precisely the concept of perfect life commonly portrayed in those residential areas that present optimal opportunity for Nadia to puncture such perceptions. She documents narratives inside those houses in which the female protagonists challenge the unbearable complacency towards sexual escapism, and outside, where the backgrounds of her cameos incorporating bright signage and pop culture inject cultural references to her narrative.

At first glance the photographs are eye-catching, glamorous and filled with saturated colour, yet on closer inspection some might detect a melancholy element. It is precisely this juxtaposition that interests Nadia and informs much of her work. Although expressing no taboos, Nadia prefers a more subtle approach rather than creating images that aim to shock the viewer. That way, she encourages her audience to absorb and contemplate the narrative behind the image that appears before their eyes.

Her images blur the boundaries between fantasy and reality, the animate and the inanimate, challenging logic with a touch of irony and humour. Nothing is what it seems. Nadia strives to construct discernible settings onto which she then adds an element that distorts the familiarity, suggesting that something is not quite what it seems. Consequently, this changes the mood to that which is more sombre and disturbing, testing the viewer’s sense of certainty and encouraging them to linger a little longer.

In these fictional situations and central to this iconographic universe are her female protagonists. Within each photograph her models transcend into the role of actors as they portray the respective characters assigned to them. Nadia favours casting real people rather than agency models; bold, sensual and surreal with characterful features that, at times, transcend conventional beauty ideals.

There is a strong fashion element within her work attributable principally to her London College of Fashion education; and work within the world of fashion. However, she states that her inspiration stems predominantly from cinema; i.e Alfred Hitchcock, John Waters, Stanley Kubrick and the Coen brothers and cinematic photography –William Eggleston, Philip Lorca DiCorcia, Cindy Sherman and Larry Sultan…

in Collaboration with La Termica and DMB