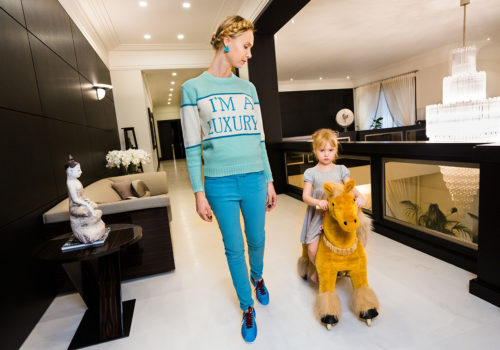 As part of the XII Moscow International Biennale ‘Fashion and Style in Photography 2021’, the Multimedia Art Museum, Moscow presents the ‘Generation Wealth’ project by renowned American documentary photographer and director Lauren Greenfield. The museum has twice hosted exhibitions of her work: for the ‘Photobiennale 2000’ festival (‘Fast Forward: Growing Up in the Shadow of Hollywood’, 1997) and the ‘Photobiennale 2004’ (‘Girl Culture’, 2002).

‘Generation Wealth’ brings to fruition a far-reaching twenty-five year inquiry, including more than 200 photographs, several documentary films and numerous interviews. Travelling across the world, from the USA to Russia and China, Lauren Greenfield has witnessed the transformation of our concept of happiness and examined the ideals, stereotypes, mechanisms and cultural codes of the modern consumer society.

‘The main theme of the “Generation Wealth” project is our increasing aspiration for wealth, which is at the same time becoming a more and more unrealistic goal for many,’ explains Lauren Greenfield. ‘I examined the shift away from traditional virtues — modesty, thrift, social responsibility — towards a culture that admires bling and self-indulgence.’

Today success is determined not so much by wealth as by a demonstration of its symbols, and by popularity based, in turn, on the very fact of fame. As Lauren Greenfield observes, ‘The American Dream once meant that through hard work each of us had an equal opportunity to do well. Now that dream has metastasized into unattainable fantasy.’ Keeping up with the Joneses has become “Keeping up with the Kardashians”. And if you don’t have money, as the rapper Future explains, the strategy is to “fake it till you make it”, even if you go broke trying.’

The desire to create an ideal ‘self-image’ turns into a universal obligation, and for this reason the cult of celebrities became one of the main themes of this project. In the global information society, TV reality shows and the Internet create the illusion of intimacy with a different, ‘privileged’ world — you can look inside the kitchen or bedroom of a star, you can ‘like’ them on Instagram, or even pretend to be a star yourself. The boundary between ‘being’ and ‘appearing’ has become increasingly less visible. We stop identifying ourselves or others through real achievements and actions, replacing them with the external attributes of social status.

‘Although this journey has sometimes felt like witnessing the decline of Western civilisation,’ says Lauren Greenfield, ‘there are glimpses of hope in the knowledge gained along the way: in fugitive financier Florian Homm’s discovery of the meaning of life after losing everything; in the peace the spendthrift Kathy finds living by the sea, even though she had to become homeless to experience it; and in the real social change enacted by Iceland’s citizens after they had the largest banking collapse in economic history. Even time-share mogul David Siegel, who tried to build the biggest house in America, admits at the end of my film “The Queen of Versailles” that he regretted pursuing his grand ambitions through frantic borrowing, calling it ‘a vicious cycle’. Implicating himself and us, he adds, “No one is without guilt”.’

Lauren Greenfield is not a detached observer or a scientist looking in from the outside and coldly contemplating the life dramas of her subjects. Trying to understand how the desire to possess turns into addiction and why the pursuit of wealth and success ultimately fails to bring satisfaction and happiness, in the ‘Generation Wealth’ documentary the artist also turns the camera on herself to explore the reasons for her personal obsession with the subject matter.

Lauren Greenfield was born in 1966 in Boston, Massachusetts and raised in Los Angeles. She earned her BA in Visual and Environmental Studies from Harvard University in 1987. Her work has been collected by many cultural institutions including the Art Institute of Chicago, Colby College Museum, Los Angeles County Museum of Art, the J. Paul Getty Museum, the San Francisco Museum of Modern Art, the Smithsonian, the International Center of Photography, Smith College Museum, the Center for Creative Photography, and the Houston Museum of Fine Arts. Her works have also appeared in publications such as The New York Times Magazine, National Geographic, The Guardian, The Times, Le Monde, New York Magazine, The New Yorker and Vanity Fair.

‘Generation Wealth’ is co-curated by Lauren Greenfield and her long-time collaborator Trudy Wilner Stack. The Moscow version of the exhibition was prepared with the curator Anna Zaitseva. The project was produced by Frank Evers and is a presentation of Evergreen Studio. The Evergreen Pictures production company worked on video materials. The exhibition was also produced by and debuted at the Annenberg Space for Photography, Los Angeles in May 2017. It has since travelled to the International Center for Photography, New York (2017), Kyotographie Festival, Kyoto (2018), Nobel Peace Center, Oslo (2018), Fotomuseum, The Hague (2018-19), Deichtorhallen, Hamburg (2019), Louisiana Museum of Modern Art, Copenhagen (2019-20) and Fotografiska Museum, Stockholm (2020).

Exhibition was produced by and debuted at Annenberg Space for Photography