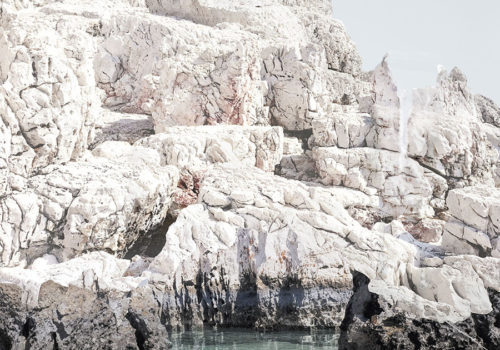 Noémie Goudal explores the successive constructions of our world while playing on those of the image. With elegant visual montages, she allows us to imagine the permanence of an earthly movement. An exhibition to see at the Grand Café, contemporary art center in Saint-Nazaire.

A stone’s throw from the Atlantic, two streets from a wide beach bathed by the autumn sun, is “Post Atlantica”, an exhibition tribute to the incredible transformation of the Earth which has made from a continent in the past, the Atlantic, the ocean we know today. How did it go from land to sea as far as the eye can see?

It is the history of the planet, 4.5 billion years old and that makes us relativize the place of humanity, which is only one big paragraph in a 1000 page book. “This idea of ​​long time interests me a lot,” explains Noémie Goudal, “it is not at all a sense of time for us humans. We live on the scale of a second, an hour, a year. This is where I find there is a very interesting time lag between that time and the time of Earth. The metamorphosis of very old materials, for example, such as coal, uranium, which suddenly become materials exploited by humans … “.

In fact, our planet is constantly evolving, born of incredible changes called by scientists “plate tectonics” and which our human scale, both temporal and spatial, makes it difficult for us to apprehend.

It is in part for this reason that Noémie Goudal wanted to invent visual devices which reflect these “strata” of time, which question the permanent construction-deconstruction of natural elements and the inevitable impact of humans since the advent of the Anthropocene, this present era when human activity has become the primary cause of climate change. Thus, a photographic series presents the same view of rocks by the sea. The artist used a print paper which is damaged in contact with water and she played with this destruction of the image in order to create a succession of prints with the same motif, but with small variations due to the impact of water on the paper. This visual “game” then makes it possible to identify the effects of destruction in a very subtle way and to question our relationship to the landscape.

Ditto, next door, in front of a video in which the artist mixes reconstructions of plants photographed in real nature and then creates fantastic movements that delight the eye.

The exhibition continues on the first floor of the building where Noémie Goudal and her team photographed a palm grove at night before cutting the images printed on site into small linear strips (like analog films) and superimposed them by creating an image with abstract intonations and great plastic beauty.

Another film continues this manipulation of images even further, giving birth to an artificial vegetal paradise composed of small theaters printed on paper and which gradually catch fire, leaving the viewer fascinated by the effect of the flames and guessing that ‘ it is a trompe-l’oeil as the conflagration progresses. So it is not nature itself that burns, but the decor made by humans, their images, their visual traps, their attempt to seduce by appearance, their world of paper. As if, with this film, it was said that the future was not the end of planet Earth, but only that of our constructions, giving weight to the notions of movement and the ephemeral inherent in all life.