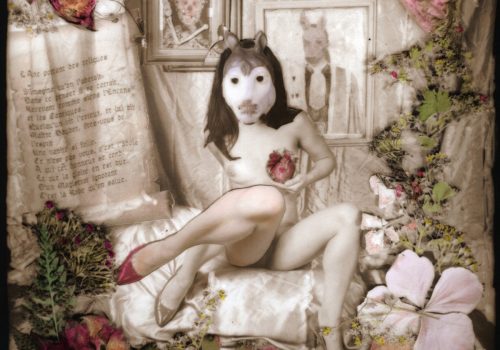 Imagine yourself immersed in a deep sleep, dreaming of being in the basket of a balloon. Imagine that instead of flying over a landscape, you look down on gigantic photographic images the size of a football field. So, is set the scene of the story. Two characters are aboard a basket: Bina, a priestess of knowledge and her disciple Irfane, a young man alive and naive. Both travel through the major themes of human history. The first part of the journey focuses on some of man’s great inventions, on what is the base of his culture; from the discovery of the pre-historic biface to the horror of historical war. Then, the trip turns into the human psyche, choosing the predominant perspective in our Western societies, namely the heuristics of psychoanalysis. This second part tries to bring out the nature of  man. Finally, the journey ends with a final attempt to understand the real in its phenomenological aspect by trying to adopt a hybrid attitude borrowed from anthropology and Bergson’s philosophy. The conclusion of the trip is tinged with ecological moralism and proposes a cosmogony that borrows from two systems……..

In the background of this story, our message is about the conception of a living Nature, like the human, with an intentionality, goals, and even a capacity for reflexivity. Only these capacities, which go far beyond ours, cannot be apprehended like this without a work imbued with humility and sympathy. This nature has allowed us immeasurable developments, both on the side of our interiority and the improvement of our living conditions. The story being to try to understand by what megalomaniac stupidity, the man obstinates to make of its benefactor a slave,  humiliating,  dirtying and seeking to destroy it. Taking refuge behind his gnosis that made him a spoiled child, a “superb” being in the image of his God, the man slipped slowly, but surely, towards his maleficent nucleus, namely pride and its procession of illusions. However, this same gnosis has ceased to warn him against this capital sin which is at the top of the pyramid of vilenies. This intrinsic pride, the root of all the diseases he brought forth, suggested to him the contempt of his own foster mother: Mother Nature. Now, what is more abject than to beat one’s mother and make her an object of humiliation by slavery? It would be too long here to debate the origin of the evil.  Literature since it exists is feeding itself in bulimia on this subject. It is important for each one to examine one’s conscience in order to try to get as close as possible to the truth, in order to find a humility that the confusion of our modern societies lets us see as a distant madeleine. At any moment, in a moment of anger, this Mother can sweep her germ of threads by blowing on it like on a twig of straw. It is a commonplace to say that if this “remote” nature decided to revolt; let the sun go out, or closer than a new virus emerges from the void, so that man falls from his statutory base of paper and kneels down to pray to his gods weeping. Now, it is not sure that his supplications are not too late and that the gods have become deaf in the Complaints Office … If everything is to disappear sooner or later, it is only up to man to live his way on earth as a blessing and to communion with nature, transcending his culture. Humanity is a body, an autonomous entity in its own right, subject to the death instinct and its multiple avatars. It is about bringing step by step, those who are the most “invaded”, to seek a regulation, by sharing the joy, that of “being alive”. It is a call to a kind of universal consciousness that tends to the safeguard of the species to which we must all turn. Finally, to save the species today is above all to save nature. It’s up to us, the illusion of cards in hand, to make it a real culture.

Jonathan Abbou – Oneiros
Dumerchez editions
All photographs are numbered on the back, signed, dated and stamped with the photographer’s stamp.