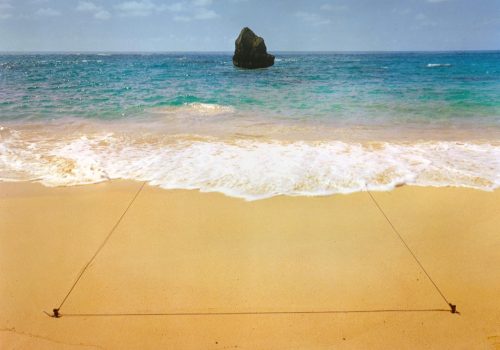 It is with great sadness that I heard about John Pfahl’s recent departure (April 15, 2020), a victim of several ailments and COVID-19.

I met John Pfahl for the first time at his Buffalo home in the Fall of 1996. My conversation with him was part of my research on American contemporary landscape photography. We spent most of the day discussing ideas and looking at his photographs. He was always very supportive of my efforts. I always enjoyed his cool humorous smile, an attitude toward life and humanity that he often expressed in his photography.

John came to Western New York to study graphic design (BFA) then communications and photography (MA) at Syracuse University. As soon as he graduated in 1968 from what was then the first graduate program in color photography, he was immediately recruited by the Rochester Institute of Technology where he would teach until 1982. After a few years of a personal sabbatical to focus on his fine-art photography, he would resume teaching as a visiting professor at the University of New Mexico and then at SUNY Buffalo. He still used to come to the MFA walk-throughs while I was studying there in 1999-2001.

John Pfahl’s innovative work in landscape photography focused on the problems of perception and representation. He systematically questioned the medium. His early and probably most worldwide famous series, Altered Landscapes, is a perfect example of his constant quest. Another area of interest consisted of investigating the concepts of picturesque, beauty, and sublime, the way they had been treated in painting since the 18th century. The works that followed Altered Landscapes are deeply influenced by these preoccupations. They led him to travel and visit the very locations that inspired artists who worked with these concepts: the Lake District in England, Lake Como in Italy (an homage to Fox Talbot), the Hudson Valley and the sierra of the American West. In these investigations he added a keen interest in “color, atmosphere, context and extra-photographic references” (Estelle Jussim, A Distanced Land, the Photographs of John Pfahl, Buffalo: The Albright-Knox Gallery, 1990). John Pfahl always printed his own work and can be considered as one of the “luminist” American photographers of the second half of the twentieth century along with Joel Meyerowitz although his “extra-photographic references” make him more a precursor of Richard Misrach, Joel Sternfeld, and more recently Edward Burtynsky.

Sadly, John Pfahl belongs to the “Rochester camp of photography” (along with his friends Nathan Lyons and Carl Chiarenza); this “camp” in opposition to the one established around New York City’s Museum of Modern Art where, from 1962 to 1991, John Szarkowski, the then director of photography, seemed to dictate what was in and what was not. I write “sadly” because the impact of what some have called “Szarkowski’s reign” is still influencing the choices of many art and photography institutions in terms of what photography is to be considered and shown of that period in its history. Consider this: John Pfahl came out of the first program in graduate color photography in America; he worked in color all his life; Altered Landscapes made him nationally and then internationally famous in the 1980s (the first show of this body of work was at Visual Studies Workshop (Rochester NY) in 1976, the same year as he was awarded his first National Endowment for the Arts grant). As most fine-art photographers of his generation, he consistently worked on long-term series: Altered Landscapes (1974-1978), Picture Windows (1978-1981), Power Places (1981-1984), Submerged Petroglyphs (1984), Missiles-Glyphs (1984-85), Arcadia Revisited (1985-1986), Waterfalls (1988-1995), Smoke (1988-1989), The Very Rich Hours of the Compost Pile (1992-1993), Permutations on the Picturesque (1993-1999), Niagara Sublime (1994-1996), Piles (1992-1998), Bali Suite (1994), Extreme Horticulture (1998-2002), Luminous River (2002-2004), Scrolls (2006), Les Métamorphoses de la terre (2010). Interestingly, as early as the early 1990s, Pfahl was interested in digital technology and in the ways to revisit his own interests through the new medium. Among these new ventures, and after Altered Landscapes and Power Places, Permutations on the Picturesque remains an interesting testimony of Pfahl’s inquisitive and humorous mind: the photographs he made on 4”x5” color negatives revisiting the history of painting (especially watercolor in the nineteenth century the English Lake District) were scanned and printed on watercolor paper through the Iris/Giclée process. A thin band of pixelated details ran across each print reminding the viewer of the use of the new technology. Aside from many private art galleries and university galleries, John Pfahl had solo exhibitions at the George Eastman Museum, Princeton University Art Museum, The Museum of Contemporary Photography and the Art Institute in Chicago, La Jolla Museum of Contemporary Art, the Los Angeles County Museum of Art and the San Francisco Museum of Art in California. His work was included in numerous prestigious national and international exhibitions of color photography since the beginning of the 1980s. However, he did not have a single solo exhibition at the Museum of Modern Art in New York where Szarkowski—still echoed nowadays by non-rigorous if not lazy art critics, curators, photo historians and researchers—did not consider that there was any serious color fine-art photography before his Eggleston show in 1976. The collection of the museum only holds one anecdotal print by Pfahl (Pink House, 1977).

On the bright side, the photographer has had a long-time collaboration with the George Eastman Museum that holds two sets of his major series: one to be exhibited and used by scholars, another one to be stored in the dark of the museum cold room for conservation purposes. And here is the rub, most of the work by Pfahl until the 1990s was printed on Ektacolor paper, a few, such as some editions of Altered Landscapes, were made with the dye-transfer process; and Missiles/Glyphs was printed with the Cibachrome (later to be Ilfochrome) process. The problem, already denounced in Henry Wilhelm’s research as soon as the late 1970s, is that all fade, at various speeds, especially when exposed to light and to “normal” high temperatures.

Hopefully we will have a soon-to-come retrospective of John Pfahl’s life-time achievements and someone, a public or private institution, will dedicate funds to preserve this historical body of work… in digital format.

Books by John Pfahl to be considered: