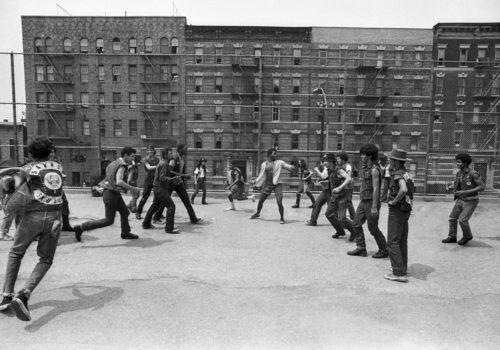 Jean-Pierre Laffont’s photographs, The South Bronx and the Savage Skulls Gang will be exhibited in New York at Fotografiska and Sous Les Étoiles gallery in January and February 2023. He sent us this text.

During the summer of 1972, the South Bronx was densely populated with several gangs: the Dirty Dozen; the Seven Immortals; and the Savage Nomads, to name a few. The Savage Skulls were the only ones I wanted to meet as the name of this gang had made headlines in New York newspapers more than once since they violently settled scores with drug dealers. The Savage Skulls were easy to spot on Fox Street, one of the main streets of the Bronx, but one still had to approach them, so I went with my camera and a friend and from the safety of my car, I initiated contact with several of them with surprising ease. They quickly had numerous questions: they wanted to know who I was, where I came from, what I wanted, where the images would be printed and if I worked in black and white or color. When I told them I was a French photographer, they invited me to follow them, and they introduced me to about 20 other gang members. The majority of them were between 13 and 20 years old of Puerto Rican origin, and they spoke Spanish. They told me I could photograph them.

I returned alone the next day with just a camera, and they welcomed me as if I was an old friend. They showed me where to park my car securely. The Skulls were the “Enfants Terribles” of their neighborhood. They strolled from block to block and stopped to chat with the police. From time to time, they would meet a member of another gang and I saw them pass off a pistol in broad daylight without a care. They liked to line up side to side along the entire width of the sidewalk. Their uniform was a jean jacket, sometimes of leather, upon which was sewn “Savage Skulls” in large letters.

Their graffiti was everywhere. “Savage Skulls” was written on doors, walls, garbage cans, telephone booths. They were very affectionate with each other. The couples made out in public and held hands. Together they formed a large and very close family. They spent a lot of time with their relatives and played with each other’s babies. Their mothers sat on their stoops joking and teasing them. They fought playfully with one another using sticks as pretend guns, and practiced fighting with knives.

I learned that their leader had just been released from the hospital after being wounded by a bullet in the abdomen. His number two hadn’t been so lucky, and was dead. I took photos without asking a single question about the shooting and no gang member violated their code of silence. In the neighborhood were many empty public spaces, including basketball courts surrounded by wire fences where they would climb and chase one another like in a dance. I photographed them and thought of the film West Side Story.

They took me to their club in the dark basement of a building. Two or three lamps with colored light bulbs lit the wall, upon which were scattered posters of movies, sports figures, girls and bands. The music was very loud but they didn’t dance. This was a place where they could talk without end about their projects, their outings and their encounters. They drank beer after beer and showed off their “bling:” knives, hand cuffs, brass knuckles, etc. When I took my leave, they gave me hugs and told me to “come back whenever you want,” and I felt that they meant it sincerely.

Rival gangs had clearly delineated zones with rules of engagement. It was obvious to me that anything that occurred outside their universe held little interest to them. Though living in an outer borough of the biggest city in the world, they made no effort to integrate into a society that ignored and rejected them. They didn’t think of themselves as citizens; they respected their own laws and made others respect them as well. They had an elected leader who they obeyed. Their goal was to defend themselves against the police. They declared war against the drug traffickers, who were forbidden from entering their zone. Some gangs had been known to send interlopers plummeting to their deaths from rooftops for the police to find on the sidewalk.

I felt admiration for these struggling, disadvantaged youths, who, by banding together, found a way to empower themselves and support each other despite the poverty that engulfed them.

Jean-Pierre Laffont – Photojournalist
Jean-Pierre Laffont attended the School of Graphic Art in Vevey, Switzerland, where he studied photography.
He was a founding member of the Gamma USA and Sygma Photo News agencies.
For more than five decades, Laffont traveled across the five continents covering the news, the people, and the social and economic issues of his time. His photos were published in the world’s leading news magazines, including Le Figaro, London Sunday Times, Newsweek, Paris Match, Stern, and Time. He was named one of the one hundred most important people in photography.

Awards:
Overseas Press Club of America’s Madeline Dane Ross Award, the World Press Photo General Picture Award, University of Missouri’s World Understanding Award and First Prize from the New York Newspaper Guild. In 1996 he was honored with the National French Order of Chevalier des Arts et des Lettres (a Knight in the National French Order of Arts and Letters). In 2016 Jean Pierre was named International Photographer of the Year of the Pingyao Photo Festival in China. In 2020 he received
The Visa D’Or Award du Figaro Magazine for Lifetime Achievement. In 2021 he received The Lucie Award for Achievement in Photojournalism.
Laffont resides in New York with his wife Eliane.

FOTOGRAFISKA
As 2023 marks the 50th anniversary of the most powerful cultural movement of our generation, hip-hop, FOTOGRAFISKA New York presents  “Hip Hop: Conscious, Unconscious,” a new exhibition that traces hip-hop’s origins—starting in the Bronx in 1973, as a social movement by-and-for the local community of African, Latino, and Caribbean Americans—to the worldwide phenomenon it has become 50 years later. Opening January 26th 2023 and will remain in view until May 2023, and will go overseas to Stockholm and Berlin.

SOUS LES ETOILES GALLERY
When Jean-Pierre came to the United States in 1965, America was on fire with the emergence of the Hippie movement, the first Gay Pride, the Feminist parades, the protests against the Vietnam War. New York was dirty and dangerous, but a huge wave of optimism and exceptional energy was uplifting the country. It is in this context that Jean-Pierre started to photograph New York and the Bronx and the Savage Skulls Gang.
GANGS AND PROTESTS will show Jean-Pierre Laffont’s photos from February 2nd to March 18th 2023.