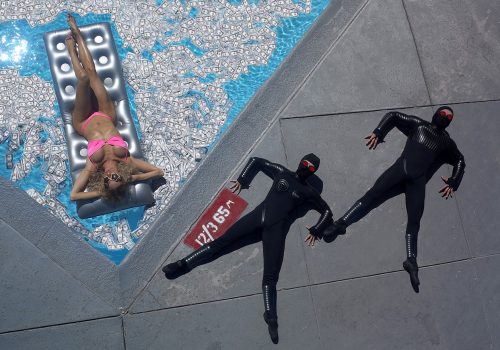 2 days ago, I received this email and these images by Jean-Marie Périer. Formidable!

In 2004 a director asked me to meet him in Belgium to offer me to imagine a book on a show in Las Vegas. And I came across a creator of memories that the French public does not know, while he has been famous all over the world for years, especially in Canada, the United States and Macau. The first sentence he said to me was: “I saw your work. This book do it the way you want! This doesn’t happen to you every day.

Franco Dragone had been contacted by Steve Wynn, one of the great entrepreneurs of Las Vegas. He first built the “Mirage resort”, considered by some at the time to be “the greatest success in the history of the world”. After inventing the “Treasure Island” and the “Bellagio”, thus sounding the revival of a city created half a century ago by a visionary madman.

With a budget of three billion dollars, “Wynn Las Vegas” is the largest construction site in the history of the region.

Two thousand seven hundred rooms, a ten thousand square meter casino, eighteen restaurants, an eleven hundred seat theater, all the luxury boutiques in the world, a golf course and a museum. It’s even the first time I’ve seen a store in a resort that had a shop window where you can buy Ferraris.

Steve Wynn made the following proposal to Franco: “Imagine the show you want, I will build the theater according to your wishes. ”

So, opposite the “Frontier”, one of the oldest hotels on the site, within the new “Wynn Las Vegas”, there is now this circular theater built for “The Dream” of Franco Dragone.

The first time I saw the costumes I wanted to take them out of the imaginary world of Franco to take them for a ride in reality, in the world of people, even in my dreams. But getting the artists out of rehearsals, dressed in costumes designed only for the environment of the stage, until a few days before the premiere when the stage fright is at its height, was not an easy task. As for Franco, I thank him for having trusted me to the point of letting me take these characters invented by him into the world, without even asking me what I was going to do with them. In the world of entertainment where the ego is omnipresent, it is a rare generosity.