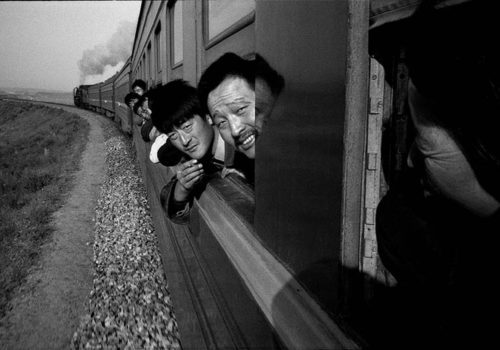 Jean Loh told us about the death of Chinese photographer Wang Fuchun, he pays homage to him:

I learn this morning of another painful loss, my friend the great photographer of North East China Wang Fuchun died yesterday in Beijing of cancer – he was 79 years old, another photographer after Li Zhensheng and Bruno Barbey who was born could not cross the line of 80 YEARS!

I spent the day editing these 40 images for his retrospective of 40 years of the Chinese in the Train, his opus, the work of his life devoted to the railroad of China. (…)

(…) Wang Fuchun’s funeral took place this Monday morning in Pekin, at the Babaoshan cemetery, the Mountain of Eight Treasures, what a name for a paradise for photographers! ” Jean-Loh

Foreword to Wang Fuchun’s 40-year Retrospective exhibition in 2017 in Beijing.

His retrospective attests to the patient construction of a monument to China’s economic and social development from the perspective of a people on the move. Traveling is not a matter of summer holidays here, it is a matter of squeeze, sweat and tears. We wonder how Wang Fuchun manages to complete this cinemascope of such a vast country, crossing so many cities and provinces and capturing the faces of so many men and women and babies, yet achieving the remarkable feast of conveying emotion and empathy through tiny decisive moments of intimacy in the middle of chaos from the mass transhumance.

Indeed smart leaders have understood very early on the necessity to dispose of a railway system to sustain the vitality of this vast country of over one billion souls, finding ways to link up the richer coastal region to the poorer backlands, to facilitate the migration of farmers to the cities, in order to meet employment needs that have been created out of urbanization and the vast housing construction boom. Also to satisfy the unique phenomenon in the Chinese custom of New Year (Spring) transportation (Chun Yun) that brings half a billion people back and forth from the eastern coast back to their western inner-land home and vice versa, every spring. Unquestionably railways and train are the backbones of the successful economic development which enables China to reach the status of world’s number two super power.

To Wang Fuchun who has a family background in the railways and himself went to the art school of Chinese railways before he took up a camera, the train has become his family, over the past forty years he has traveled almost daily and with ease from city to city from province to province. The choo-choo of the early steam-engine train and the clickety-clack has been his growing-up music from childhood to adulthood, which he misses since the appearance of the smoother swoosh of China’s modern high speed train. In this 2017 retrospective, from his first picture dating back to 1977, exactly forty years ago, showing a railway hostess offering a comics book to a kid, a typical propaganda photography, just one year after the end of the Cultural Revolution, to his 1997 picture of the whole train standing up to mourn the passing of the country paramount leader Deng Xiaoping, the father of the Reform and Opening era, then fast forward to Tibetan travelers boarding the Lassa-Beijing in 2007, the change has been mind-boggling. Here we must pay tribute to Wang Fuchun’s remarkable sense of editing, he succeeded in arranging his book in thematic chapters, the 1977 picture falls in the “reading” chapter, others show travelers exercising, sleeping, smoking, phoning, playing cards or mahjong etc. even praying. All the facets of a common man’s everyday life.

Today’s travelers with their heads uniformly lowered down to their mobile phone or working or watching movies on their laptop; are less eye-catching and less exotic, they simply are no longer the multifaceted humanity Wang Fuchun used to press flesh with in the 1980’s and the 1990’s. Those were the years of the silent China Rise but with noisy and animated frantic scenes inside and outside of the train. Where are the babies who pissed on a drinking glass standing naked on the coach? Where are the newly-weds lying face to face with tenderness in the sleeping car, or wrapped from head to toe under the seat’s blanket, the best way to totally isolate oneself from the outside world? Where are they today? Where-else can we catch a glimpse of the true nature of Chinese people if not on a train? There is such a physicality in Wang’s penetrating photography, like this young father holding his infant close to his shirtless chest, a physicality to the point where we can feel the heat or the cold, we can sense the smell and the tension, the lightness and the good-nature in people’s genuine smile, in their whole-hearted laughter. That says a lot about Wang Fuchun’s personal empathy. Hostility is totally absent, these travelers are true companions of the photographer’s, his brothers and sisters, his uncles and aunties. He most likely talked to them, sympathized with their stories. It is a family album, indeed. Wang Fuchun basically has photographed his family, their work and play and rest, on a moving train, their valiant effort in enduring the long journey while traveling on “standing ticket”. That is also when Wang Fuchun became the expert in capturing yawning shots, it is indeed so tiresome to travel, in crowded confined spaces, and physiologically yawning comes as a natural reaction and an expression of a need for air, like fish coming up to the surface to breathe.

Wang Fuchun’s monumental retrospective constitutes a precious testimony to Chinese people’s vitality and their remarkable capacity to endure pain and discomfort just to strive on, probably here is the key to the heart and soul of the people of China as a humanity and as individuals.

Wang Fuchun (1943-2021) was born in Harbin Heilongjiang province, he lost both parents at young age, and was raised by his elder brother who worked in the railways. During the Cultural Revolution he was enrolled in the army, and studied at the arts section of Railway School. He started taking pictures of the soon-to-be faded out steam locomotives, those precious photos are now in China’s railway museum. He became well-known after winning Alcatel’s Award for Best Chinese Contemporary Photographer at the 2002 Pingyao International Photo Festival, with his series CHINESE ON THE TRAIN. He remained sentimental to Pingyao and became the only Chinese photographer who had exhibited non-stop each year for a decade at the Pingyao Festival.

Most recently “One Billion Journeys: Wang Fuchun’s Chinese on the Train”, was on display at the British National Railway Museum May-August 2019 in York. Before the pandemic broke out in UK and Europe, Wang Fuchun’s exhibition is supposed to travel to Locomotion in Shildon, before visiting the Science and Industry Museum in Manchester, the National Science and Media Museum in Bradford, and finally the Science Museum in London.

He is considered one of the greatest documentary photographers in China and his North-East Men remains his tribute to the spirit, the character and great heart of his fellow countrymen from the North East of China.