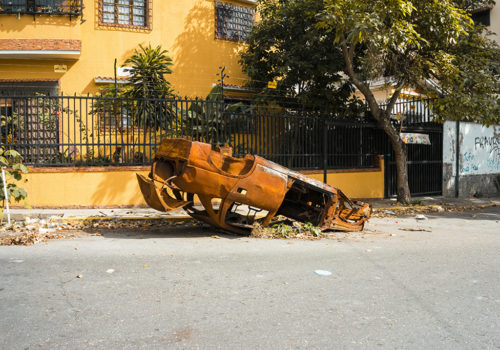 Preview
Caracas, Venezuela.
Once a place full of opportunities and economic growth – now, in 2017, Venezuela has an official inflation rate of 741%* (*data from Trading Economics, last updated on May of 2017.). Though already the highest inflation rate in the world, the IMF predicts it to rise to as high as 1642% in 2017. The government is also more than, and steadily increasing, 10 $ billion in debt to foreign bodies. Some basic products like chicken and toilet paper are rationed out by the state – while most cannot be found or are sold for ten times the price on the black market. Moreover Caracas is the most dangerous city on the planet – with allegedly 28,479 violent deaths reported in 2016* (*data from the Venezuelan Violence Observatory). But it is hard to find the exact, reliable numbers.
Current President Nicolas Maduro – a highly disputed man whom took over presidency after Chavez death in 2013 – did nothing to prevent the increase of inflation or product shortages. Neither did he stop the murder rate from growing, despite expanding the army and police force. With little to no history of cooperation, the left and right political parties have been stuck in a deadlock over the last years.
New laws have been proposed by the (mostly) opposition assembly, which have been steadily rejected by Maduro’s government. The young generation, the ones who never got to chance to vote and are left behind with broken fragments of their nation, are demonstrating on the streets against what they call a dictatorship.
This series is trying to best convey what people in Caracas would talk to me, a foreigner, about – crime, constant feelings of anxiousness and paranoia, not finding food nor medicine, deterioration of infrastructure, standing in hourlong lines and how things used to be different. The colors also reflect the intense political and social polarization: red representing the current government; blue the many individuals fighting against it.
This is an ongoing project – last trip to Venezuela was 20/12/2016 – 09/01/2017
Iggy Smalls
www.iggysmalls.com