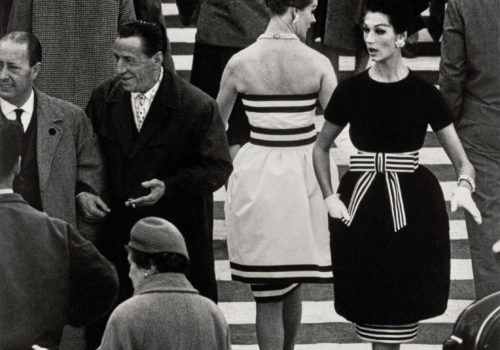 Contrary to popular belief, what was cool today may still be cool tomorrow, especially in fashion. However, that all depends on who took the picture and what the image is of, naturally.

From its inception, fashion photography has consistently operated as a cultural tool. Borrowing ideas and inspiration from the art world in the 1920s to thriving on social media campaigns today, fashion photography has continually redefined itself to serve the needs of the times. In its power and agency as a harbinger of taste, fashion photography not only presents us with ways of seeing and remembering each passing epoch, but it also expands and commercializes its most popular themes. The art form, which the photographers who shot fashion would collectively create, introduced new and subtle modes of expression, influenced by the classical norms of the past, the commercial success of the industry, and the aesthetic liberties of pursuing self-expression. After all, fashion photography not only sells us on the desirability of clothes but ultimately presents the prevailing attitudes, cultural phenomena, and exchange of ideas in our current place in history, becoming the expression of the “now.”

“Fashion photography is the ultimate cultural assimilator, absorbing and reimagining history and the present, high art and mass culture, the aesthetic and the political.” – Eugéne Shinkle, The Story of Fashion and Photography.

Fashion often acts as a mirror of contemporary society, reflecting the fluctuations of taste and attitudes that correspond to a specific time. The accepted norms grow old, and new styles emerge to reenergize image-making. Just as designers always feel the pressure to create the “new,” the “exciting,” or the “latest and greatest,” photographers operated under a similar set of expectations, because in the end, they were the chosen method of showcasing and disseminating the clothes. During this process, fashion photographers, who predominantly created photographs by serving commercial interests, worked in an environment to produce pictures that elevated reality to a realm of fantasy, invoking desire and generating, at times, transgressive social stances towards dress and style.

In The Telling of Fashion Photography, we include photographs that span fashion photography’s evolution from the 1930s until the present day and present some of the most renowned photographers who have left their mark on the field. These artists moved fashion photography from the calculated and controlled pictures inside the sacrosanct studio setting to the unpredictability of the outside world, forever changing and advancing the possibilities of the genre in the process. From Horst P. Horst, Frank Horvat, Helmut Newton, Melvin Sokolsky, William Klein, Jim Lee, Harry Benson, Arthur Elgort, Herb Ritts, Peter Lindbergh, to Albert Watson, these fashion photography titans developed the language of photography and modernized, with their unique contributions, the expression of style and attitude toward fashion.

“It’s often argued that all fashion photography is advertising in disguise – that it’s created to promote designers and fashion companies and, ultimately, to sell clothes. This may be true, but to become part of our collective memory, a fashion image must capture ideas, attitudes, and aspirations that go beyond advertising.” – E. Shinkle

Holden Luntz Gallery exhibits 20th and 21st century master fine art photography. The gallery opened its doors in 2001 and is a member of the ADAA (Art Dealers Association of America) and AIPAD (Association of International Photography Art Dealers). Holden Luntz has had over 30 years of experience curating exhibitions and representing photographers. The gallery offers a broad range of American and European photographs which are historically important. It also shows contemporary photography whose artists are determining the medium’s new boundaries.

The Telling of Fashion : Trailblazers of Photography exhibition