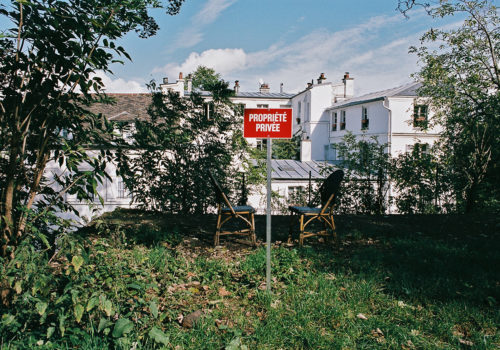 This is an extraordinarily stupid law. Roger Thérond, the legendary boss of Paris Match and PHOTO called it the villainous law. In fact, it is the triumph of political correctness. Look at the pictures of Henri Cartier-Bresson, Doisneau, Ronis which would disappear if they were taken today!

A photographer, Gilles D’Elia, sent us these images and this text inspired by the consequences of this absurdity:

“In 2015, the Observatoire de l’image noted how much the Paris Magnum exhibition revealed the extent of the ravages made by image rights:“ Parisians have disappeared from street photographs to make way for shadows, backs or artistic vagueness skilfully worked to avoid any lawsuit related to image rights ”.

From that date until today, I have dedicated myself to photographing precisely these ravages. As this portfolio was a response to this observation, it was made entirely in Paris – undoubtedly the most photographed city in the world, and perhaps the one that made photography lie the most.

First of all, I wanted to prove that, without showing people, we can still photograph their social activity with as much acuity as in the past. It could have been a consolation, it was quite the opposite: by no longer photographing people but the signs of their activity and their life, I understood that the ravages of image rights go beyond photography and are inherent to the devastation caused by the advent of a new world, in which the earthling gives way to the smartien. Who moves through the arteries of a smart-city crowded with coworking spaces where he can telecommute, smartphone in hand. It is therefore necessary to redevelop the city for it, and we will see how Paris has become a gigantic construction site which is preparing a tailor-made space for humans who are less and less photographable because they are less and less human.

And paradoxically, the more the smartien jealously asserts his image rights, the more he exposes himself in selfies on social networks. But this is not illogical: his own image gradually becomes his most precious property, since it is through the distribution of this same image that he is valued on the market. We can therefore understand why he now feverishly claims the exclusivity of distributing his image.

This work would finally like to show, to the point of absurdity, the ultimate paradox of image rights: even by refusing to publish the slightest face, the least human being, I perhaps did not have the right to photograph, on a bus shelter, the RATP map of Paris burnt during a demonstration of yellow vests, nor the poster of an exhibition presented by the municipality, nor this telephone number on the front of a massage parlor, nor this or that advertising poster, even less this work by Jeff Koons, this portrait of Marilyn Monroe, or this famous image of Garry Winogrand. In fact, the keen observer will notice that many images in this portfolio are potentially illegal.

In other words: by photographing the signs of human activity, without even photographing humans, I necessarily photograph things that I do not have the right to reproduce. And here we come to the heart of the problem: their right to image will know no limit, ultimately claiming a photographic practice that will no longer tell anything, an image deprived of meaning.

Image rights !!!! – four exclamation points: to set our image rights against theirs. To claim that we have the right to capture images, with or without a face, to tell stories by showing our images, and to be witnesses, through photography, of History. ”