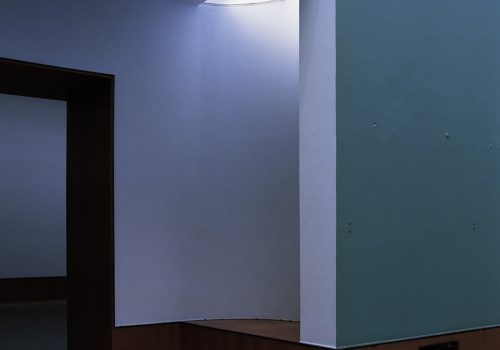 Satijn Panyigay makes photographic work that invites its viewer to slow down. She captures the silence of empty spaces and, staging it as a photograph, aims to unveil the layer underneath. Working with uninhabited grounds, Panyigay searches for presence in a seeming emptiness.
Museum Boijmans Van Beuningen (Rotterdam) has recently closed its doors for a long-term, large-scale renovation. Satijn Panyigay was allowed to take her time to capture the uncovered museum’s essence at a very special moment – a twilight zone between the museum’s closure and the start of the rebuilding, a state that no one sees. The museum walls, stripped of all the icons, got caught on camera as an object, losing their dominant role of a background that accommodates art.

The series ‘Twilight Zone – Museum Boijmans van Beuningen” is a part of a larger project in which Satijn Panyigay is capturing the character of the empty exhibition spaces of leading Dutch museums by photographing them between the shows, with no art on display and no visitors allowed.

The rooms of Boijmans Van Beuningen have a recognizable architecture. Its spaces where icons of art can normally be seen are now empty, pending. The walls, floors, ceilings, colors, the incidence of light, and traces of the previous exhibitions fill in the blanks of the museum’s identity. The empty rooms get to become the artwork.

There’s another side to this series. “When art is not there, what do you then see? When you’re not distracted by the art? You only see the traces of what was there before, and your imagination fills in the rest – the stories, the happenings, and thus the photos invite you to go inward.” In Satijn Panyigay’s oeuvre, there is always a harmonious balance between the light and the dark, cheerful and gloomy, resilience, and vulnerability. Her work, in absence of any direct human narratives, is surprisingly humane – she addresses the feelings of its observer.