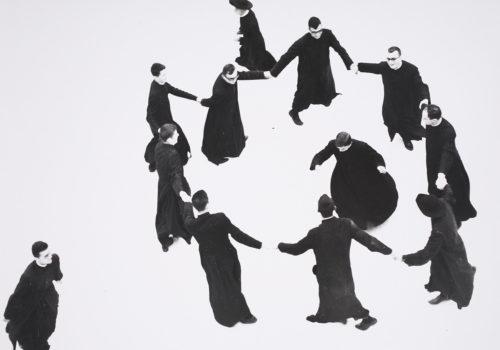 Since 2001, the Berthet-Aittouarès gallery presents the various aspects of the deep and singular work of the Italian photographer: the chronicle of the villages of Scanno in Abruzzo, of Senigallia in the province of Marche, from landscapes seen from the sky to space intimate with his work, photographed in the late 90s, as he approached his death.

Today, a new reading of the cult series on the seminarians is offered through 33 ancient prints, mostly unpublished vintages. This was carried out at the beginning of the 1960s after his foray into the episcopal seminary of Senigallia, as Don Enzo Formiconi, the rector, had allowed it with the risk of being dismissed.

Senigallia’s series on seminarians was first seen in 1963 at Photokina in Cologne, then John Szarkowski opened the photography collection of the MoMA in New York to it in 1967. Not moving away from the aesthetic bias offered by the contrast of the black cassocks with the snow and the glare of the sun, Giacomelli’s images transmit a component of the reality of young people who are not always motivated by a vocation, sent to the seminary by families too happy to have a son accessible to education and one less mouth to feed.

Inscribed by Giacomelli as an epigraph of the Pretini, “Io non ho mani che mi accarezzino il volto”, “I have no hands that caress my face”, the first line of a poem written by Padre Davide Maria Turoldo, sets the humanist, social and political tone of this second part devoted by the photographer to young people removed from the affection of their family or the love of their age.

60 years later, The gallery found Gianfranco, one of the former seminarians.

Meeting with Gianfranco
November 10 from 6 p.m.
With the friendly participation of Katiuscia Biondi and Simone Giacomelli, granddaughter and son of Mario Giacomelli.

What can save human beings from the pain, the disappointed expectations, the anguish and the sadness of the modern world? Can a fortress church do this? Do these men dressed in black and constrained by iron rules far from the few pleasures of the world know joy? […] In a short time, the desire to disturb the apparent tranquility of this place of silence and prayers seized Giacomelli.
Simone Giacomelli

The world of seminarians was a new world for me. I had been in contact with them for three years: the first for the reconstruction alone and the others to elaborate ideas and thoughts. One day when it was snowing, we started making snowballs. So I charged my camera, and while they were playing, I photographed them. I was doing longer exposures and the flash was building up the white. I photographed the little priests as they broke the ‘rules’.
Mario Giacomelli

Giacomelli’s arrival at the seminary of Senigallia preceded the Second Vatican Council which took place between 1962 and 1965. It was therefore in a climate of desire for renewal and reflection on the openness of the Catholic Church to the modern world and to contemporary culture that Giacomelli began his work with the young seminarians in 1961. Gianfranco, one of them, then aged 16, bears witness today to the joyful revolution that the presence of the artist provoked: the “little priests” were playing, improvising rounds, shooting snowballs, they even smoked a few cigars…and that’s what caused the total stoppage. They cried foul of the little priests who smoked cigars! Giacomelli was chased away perfunctorily. The same fate was reserved to the rector of the seminary Don Enzo Formiconi, whose ideas were open to the renewal of the church.
Extract from the interview of Odile Aittouarès with Gianfranco M.