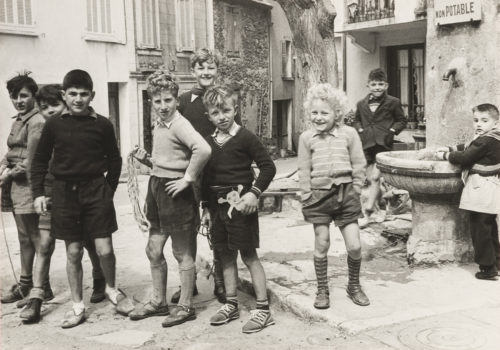 An affinity for beauty shaped the life and work of the American photographer Peter Fink (1907 – 1984). After studying art in Chicago, his talents led him into the world of exclusive interiors and lifestyle. He worked as an art director for the couturier Lucien Lelong and Lanvin Parfums, responsible for showroom design, product packaging and advertising at both luxury houses. He lived in New York and Paris, met greats of the cultural scene, discovered photography. From the 1950s onwards, Fink travelled for fashion photography, throughout Europe, North Africa, Asia and his native USA. On the road, he made the camera his eye – to translate into pictures the beauty he discovered in people, things and places throughout his life, as Fink once explained in an interview.

During his lifetime, Peter Fink’s photographs were collected by renowned institutions worldwide and celebrated in more than 50 solo exhibitions. A good 15 years after the last solo show, the Artistic Director of Fotografie Forum Frankfurt (FFF), Celina Lunsford and her co-curator Andrea Horvay, have taken a completely new look at the photographer’s œuvre: After two years of intensive researching his artist archive, the FFF now presents the retrospective . On view are more than 200 images, mostly vintage black and white prints, and objects by the American photographer from over 30 years of his work. This selection conveys his rich variety of themes, his respectful empathy for models and motifs, and his poetic visual language.

With diverse street photography, for example, Fink gives insight into foreign cultures. He shows a quick haircut in a Hong Kong backstreet, the toil of field-hands in Portugal, the nocturnal lights of pulsating cities. In between, again and again, images of children – engrossed in play, curiously looking out of the window, dreaming on the merry-go-round. The young generation, for the photographer it is an expression of hope and joie de vivre in post-war times.

His stagings of fashion are uniquely fitting to the times and the locations, as well as his character driven portraits of celebrities and creatives. Never does the detail escape this voyager of beauty: delicate grasses breaking through a blanket of snow, the dark garment in front of a Tunesian wall, that for a moment in light becomes an haute couture robe. Fink’s key works from the 1960s and 1970s include Refractions, the painterly views of American architecture, distorted by reflection or cropping.

The most extensive book on the photographer to date, Peter Fink. My Mind’s Eye (Kehrer Verlag, Heidelberg), accompanies this exhibition. With several never-before-seen Fink images, found through close cooperation with the Estate of Peter Fink, the show and the publication provide the chance to rediscover and revisit one of America’s most versatile and successful photographers.