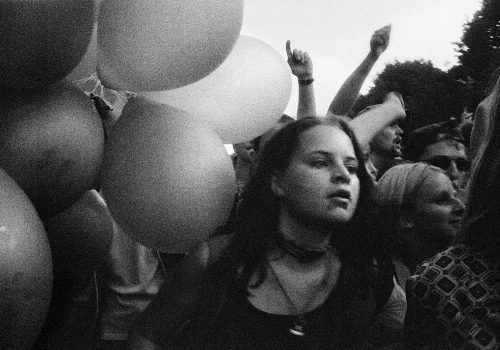 Curated by Candice M. Hamelin, the exhibition examines how German and international photographers captured Berlin—East, West, and unified—between the immediate postwar years and the end of the twentieth century. It includes photographs and photographic series by 23 photographers who took Berlin as their subject and, on occasion, as the inspiration for their work. Belonging to the genres of documentary, street, architectural, conceptual, portrait, and experimental photography, their photographs—taken for magazines, photobooks, thesis projects, artistic ends, and private use—draw attention to the diverse photographic practices that flourished in Berlin as well as to the immense social, political, and cultural changes that the city underwent over the course of 55 years.

Featuring over 200 works, some of which have never been exhibited before, Berlin, 1945–2000: A Photographic Subject presents multiple ways of seeing, being in, and photographing Berlin. Beginning with the immediate postwar period, the show includes photographs that bear witness to the damage Berlin endured during the Second World War and to the collective efforts of the Trümmerfrauen (Rubble Women). It also features works that document and provide insight into everyday life in the second half of the 1940s and 1950s; the building boom in the Eastern and Western parts of the city in the 1960s and 1970s; subcultures that began to be seen and photographed on both sides of the political divide in the late 1970s and 1980s; ways of life that either vanished or emerged following the fall of the Berlin Wall; and the large development projects that slowly replaced some of the city’s ruins and voids after German reunification. Finally, the exhibition includes photographs that raise critical questions about perception and the photographic process by offering varied perspectives of a city that not only rebuilt itself twice during the period under examination, but that also, despite—or perhaps because of—the changes it endured, remains one of Europe’s cultural centers.

Candice M. Hamelin received her MA in Fine Arts from the University of Toronto and her PhD in History of Art from the University of Michigan. After defending her dissertation, Behind Immaterial and Material Divides: East German Photography, 1949-1989, she accepted The Berlin Program for Advanced German and European Studies Postdoctoral Fellowship at the Freie Universität Berlin and the Getty Research Institute Fellowship, residing first in Berlin and then in Los Angeles. She has published extensively on East German art photography and has been the recipient of numerous grants and fellowships, including the University of Michigan’s Institute for the Humanities Fellowship and the Social Sciences and Humanities Research Council of Canada. She began her curatorial practice under the tutelage of Barbara Fischer at the University of Toronto and has curated shows in Toronto, New York, and Los Angeles. Berlin, 1945–2000: A Photographic Subject is her first show at the Reinbeckhallen.

The exhibition takes place as part of the