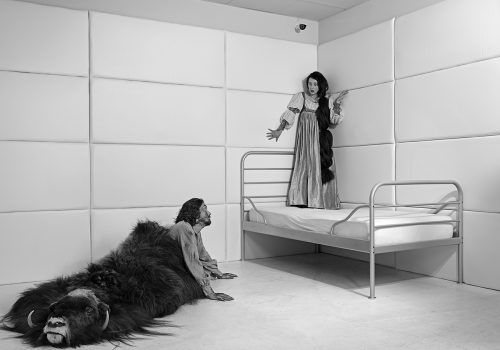 Once upon a time… the wicked witch was Lilith, Queen of the Demons, the magical apple came from the Garden of Eden, and the first Rapunzel was Princess Keziah, daughter of King Solomon, locked in a tower waiting for true love.

The Museum of Jewish Montreal invites you to its new exhibition Snapshots from the Garden of Eden by Canadian contemporary artist Dina Goldstein to discover the unexpected parallels between contemporary concerns, well-loved fairytales, and the oft-neglected but rich tradition of Jewish fables. A collection of 11 large-scale black and white photographs, Snapshots reimagines modernized versions of characters and passages from Jewish fairytales, folk stories, and legends collected in the book Leaves from The Garden of Eden by award- winning folklorist Howard Schwartz. Drawn from Jewish oral and written traditions across the centuries, the stories span the Jewish world — from Italy to Afghanistan — bringing to life the diversity and vibrancy of this overlooked area of Jewish storytelling and heritage.

Renowned for her inventive reinterpretations of cultural symbols, Goldstein’s Snapshots reframes Jewish lore both famed and forgotten through the eyes of the 21st Century. “The resonance of Goldstein’s work stems from her ability to weave intricate visual narratives,” says curator Alyssa Stokvis-Hauer, “where the history of Jewish folklore is catapulted into the modern era with a cast of characters and film noir- esque scenes that are provocative, imaginative, and layered with meaning.” Playing with visual and narrative archetypes, Goldstein creates new connections and relevance by merging the traditional and whimsical with contemporary themes of technology, desire, justice, and identity, exploring and reinvigorating the history and role of Jewish folk narratives in broader cultural memory.

Commissioned in 2017 by the Contemporary Jewish Museum in San Francisco for an exhibition on Howard Schwartz’s book Leaves from the Garden of Eden,

Goldstein’s photographic series has already been exhibited across Europe and North America. Her exhibition at the Museum of Jewish Montreal will be the first opportunity for Montreal audiences to view this internationally toured collection. Snapshots from the Garden of Eden will be on display from February 20th to May 17th 2020.

Dina Goldstein began her career over 25 years ago as a photojournalist, evolving from a documentary and

editorial photographer into an independent artist focusing on large-scale productions of nuanced photographic tableaux. Her work is highly conceptual and complex, incorporating cultural archetypes and iconography with narratives inspired by the collective unconscious and the human condition.

Her work emerges through an entirely cinematic technique, with Dina’s established methodology following a precise pre- to post production process. Leaning into the visual language of surrealism, she stages narrative compositions that expose the underbelly of modern life, challenging the notions of cultural influence and inherent belief systems.

Goldstein’s work has been the subject of academic essays and dissertations, and has been covered extensively in media around the globe. The projects are studied and taught in art schools, photography programs and gender courses. The Fallen Princesses collection are included in elementary school textbooks, as teaching tools and subjects of discourse within the classroom.

Dina Goldstein is based in Vancouver, B.C. and is represented internationally, and consistently exhibits at festivals, biennales, commercial galleries and museums.

About the Museum of Jewish Montreal

The Museum of Jewish Montreal is an innovative place to connect with Montreal’s Jewish life and identify, share our diverse heritage, and create new cultural experiences. Our 2019/2020 contemporary art exhibition series Inside/Out, examines what exists in the space between inside and out, personal and public, or real and imagined.

The Inside/Out exhibition series has been made possible through the Shaping our Future Grant, thanks to the generous support of the Jewish Community Foundation of Montreal, the Nussia and Andre Aisenstadt Foundation, and Federation CJA.