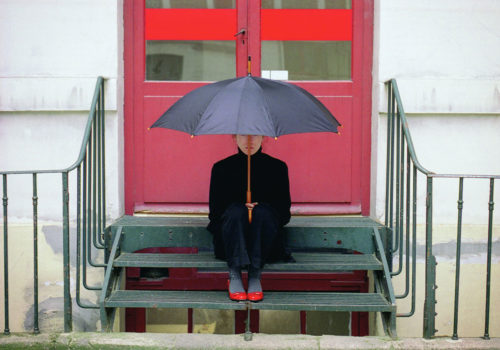 In the style of Cindy Sherman, the Swiss photographer Chantal Michel puts herself “on stage”. Her world however is more dreamlike then that of the American artist, and resolutely anchored in the traditional pictoral Swiss style. With great technical mastery, Chantal Michel reinterprets famous paintings by Ferdinand Hodler and Albert Anker.

Her inspiration also comes from fountainheads of fairy tales and fantasy tales, and overall from her own baroque imagination. A conceptual patient of herself, she often appears many times in her large images, playing roles, both feminine and masculine, and of diverse ages of life.

Born in 1968 in Berne, and educated at the School of Visual Arts of her birth town and at the Academy of Art of Karlsruhe in Germany, Chantal Michel lived for a short time in a castle, the Kiesen Castle. There she developed during her three year stay a total experience in art, inviting the public to visit the setting filled with her own works, and sharing her meals.

But since the end of January, Chantal Michel invested in another Swiss castle, from the Middle Ages, monumental and famous: the Castle of Gruyères, at the foot of which the famous cheese is made. Approximately thirty photographs and a handful of videos by this Bernese photographer have been hung in the castle, in its basements and in the roofs.

If the visit seems to transform itself into a treasure hunt, then one can say that the images become a part of the old stone walls and the historic salons. Half-Pompadour, half creature from a Brothers Grimm fairy tale, Chantal Michel blurs with malice the borders between legends and reality, between yesterday and today, between pictoral tradition and the most up-to-date digital technologies.

The dialogue of the photos and the old castle is reinforced by a thematic adaptation in the different areas of the home. Austere still life images inspired by Albert Anker were hung in the kitchen. Hunters in lederhosen pose among the trophees in the hunting room. Aristocrats heavily made-up wearing wigs decorate the private salons. Chantal Michel and her ironic art of citation are everywhere. And everywhere, a photographer who advances, masked, in order to better see herself, her and her ego of an extravagant artist.