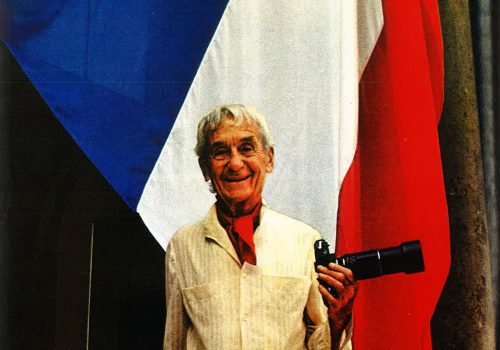 September 1974: A call from Roger Thérond, then boss of PHOTO.

“Lartigue has just shot the official portrait of Giscard. I just saw the photograph, it is wonderful. Go see Jacques and Florette tomorrow, the story is beautiful.”

The story ; Here it is, as it appeared the following month in PHOTO.

On Tuesday August 20, in the Parisian apartment of Lartigue, rue de Longchamp, the phone rings. “Hold on,” said a voice, “Valéry Giscard’Estaing wants to talk to you”. Lartigue almost giggles, wonders for a moment if he is going to hang up on the bad joker or answer him with some joke, but remembers in extremis that his French editor informed him, a few days before, of a call from the ‘Elysee Palace who was looking for his phone number.

Lartigue, amused by the blunder he almost made, waits.

Another voice, kind and firm, is heard. That of the President himself “I would like you to make my official portrait” – ”I am very honored, Mr. President, but I am only an amateur, I would not be up to such a task ”-“ But yes, insists Giscard d’Estaing; besides, I know your photos, your books and I love them. I am sure you will do it very well. So come see me tomorrow at the Elysee Palace to discuss it … ”

Never at the Elysée, had a less official photo been taken

The next day, Jacques-Henri and Florette Lartigue visited the President.

As they planned to go to the cinema on the Champs-Elysées immediately after the interview, they equipped  themselves, as is their custom when they are “in town” with a light snack that Florette carries in a basket.

In the presidential office, Giscard d´Estaing receives them, surrounded by his three dogs. The latter, of course, immediately smelled the scent of the sandwiches.

While Lartigue tells the President of his reluctance and his interlocutor reassures and convinces him at the same time, Florette has no other way to shield the basket from the lust of the dogs than to hoist it on her head …

Jacques-Henri Lartigue, finally, accepted. “But, he said to his illustrious sponsor, do not have me beheaded if the photos are not good!” – Promised, replied the President. If they fail, we will start them again. ”

The meeting is fixed for the following Monday.

While waiting for the day fixed to “shoot the portrait” of the one who will be “his” third president (had he not already, at the age of seven, by pure chance, taken a snapshot of Loubet riding a horse-drawn carriage? in the Bois, then, half a century later, that of an American senator named John Kennedy?), Lartigue reconsiders the instructions of Valéry Giscard d’Estaing: you need a simple, cheerful photo, not posed; released, in short, from the tradition perpetuated (or endured) by all the previous guests of the Elysée.

The portrait will therefore be taken, for the first time, outdoors, against the backdrop of the Elysée Palace only decorated with two huge tricolor flags, one on the courtyard side, the other on the garden side. And as the President seemed very proud of his tan, Lartigue already imagines framing his face against the white background of the flag…

On Monday August 26 at eleven o’clock, Lartigue arrives, at the wheel of his Renault 6 convertible, in front of the gates of the Elysée. He is accompanied by Florette and an assistant, Eric Brissaud, twenty-three years old, a young photographer whom he sponsored during the last Arles meetings. He gets out of the car and asks the somewhat surprised guards “if he can park in the courtyard of the palace, to avoid any risk of theft.” they had been Warned, and accept.

Another photographer is already on the scene: Hugues Vassal, from the Gamma agency, who will cover the reportage of the official photo session.

The President receives them. He is dressed in a navy blue suit, chic, discreet and fashionable.

At five past eleven, the President poses on the steps, on the Saint-Honoré side.

In front of a dumbfounded Vassal who has brought a crate of equipment, Lartigue takes out of a plastic bag a small photographic tripod which the most profane of amateurs would not want, a pair of espadrilles that he will not dare to put on ( unlike is usual habit) and a 200mm lens. From another bag, this one in wicker, he extracts two Pentax cameras and a small Leica that he brought for Florette. Lartigue is looking for his 50mm, cannot find it. We have to face the facts, he forgot it. His assistant will pick it up with a presidential car.

Lartigue begins to photograph, from the back of the courtyard, his camera on tripod twenty meters from the President. The flag falls badly, makes capricious folds or covers the model. Florette told on to it. Lartigue draws closer. The 50mm having arrived, it therefore changes optics and now works by hand. The President tells him again that he wants a photograph like Kennedy’s snapshots he saw in a book whose title he has forgotten. Even more surprisingly, he asks Lartigue to double all his photographs in black and white because, personally, he prefers that. Lartigue grumbles, affirms that the color is more cheerful, then agrees. In fact, of the thirty-five photos he will take that day, only ten will be in black and white.

Lartigue then returned to the 200mm. Like any character who poses, Giscard d´Estaing’s mouth is strained, even tense. The photographer, silent until then, begins to chat to relax him. He tells him about his paintings, his personal “diary”, about Poniatowski (his neighbor when he lives in the South), the airplanes of his youth, about tennis and the King of Sweden who practiced this sport with a starched shirt collar. The President responds, comments, evokes their mutual friends, the sculptor Lalanne in particular, from whom he bought a huge rhinoceros. “You could pose on it, jokes Lartigue” – I thought about it, but that would not please the mayors of France, retorts Giscard. Between the two men, contact is established.

From time to time the President helps Florette to arrange the unruly flag, looks amusedly at Lartigue standing, kneeling, sitting on the ground on the pebbles, leaning in the most extravagant fashion, who continues to photograph him.

Lartigue wants a change of scenery. Lets go to the garden side. The dogs arrive wagging their tails, they are sent away. The light is very strong, too strong even. From 1 / 125s to f: 5.6, we go to 1/250 s at f: 16. Lartigue has no hood for his lens  and it is Florette who, with her wicker basket, hides unwanted rays.

We come back to the courtyard. In front of the crowd of onlookers, the doors had to be closed.

For a moment, Vassal offered to lend him his Leica M5s and his Leicaflex engine. Lartigue refuses, as if amused by such a preposterous idea.

The President is relaxed, the flag disciplined, the light perfect.

Ten minutes later, the meeting is over.

Giscard d´Estaing invited Lartigue, Florette and the assistant to lunch.

He goes to his office for a few moments.

Lartigue took the opportunity to change. Here he is, shirtless in the Elysée courtyard. He will tie a small orange scarf around his neck as a tie.

After the aperitif, it’s lunch. Lartigue, a wonderful storyteller, recounts  memories of his youth, evokes his friendship for Jean Cocteau and Sacha Guitry, his passion for tennis. Giscard talks about animals, the South West of France, his vacations.

At half past two, lunch ends. “You are the youngest photographer I have ever met,” says Giscard.

Lartigue thanks him and begins to have stage fright.

At three o’clock, the color films are deposited at Central-Color and the black and white reels developed immediately. More and more nervous, Lartigue waits until the evening topics up the slides. His only obsession: the technical glitch. Around seven o’clock, he returns to look for the photos. They are good. He selects twelve, but none in black and white. On his favorite one he drew a little tricolor flag.

The next morning, he submits his work to the presidential judgment. The Elysée does not have a light table or a slide projector, so he has attached his personal viewer for the photos, which does not work very well.

Two hours later, the President calls. He is delighted. The photos appeal to him. He chose one. “Not the most cheerful, nor perhaps the best,” observes Lartigue, who is jubilant however.

To a journalist who was surprised at the small number of photos taken, Lartigue replied simply: “When I was little, I had a large camera with plate. It only contained six. I had no choice. At least one of the six had to be good ”. To another who asks him the secret of a good presidential portrait, he says: “It’s like taking a picture of a jar of jam, you have to smell it.”

What a wonderful story that of this man from another time and another world! On Monday August 26, Jean Lecanuet argued with Sanguinetti over the opening of the majority, small traders dreamed of wounds and bumps, the monthly cost of living index attracted the attention of experts. But for three and a half hours, the irrational, the gentleness and the slowness of life alone occupied the forefront of French politics…

Latest articles of the category "Memories"