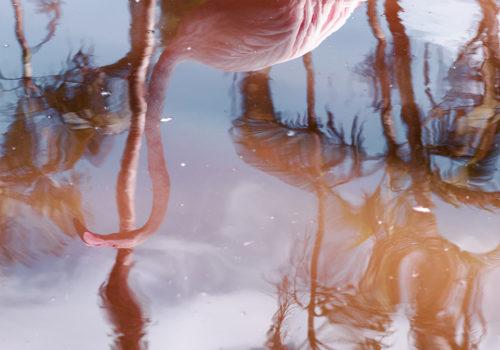 At Art Rotterdam, we presented a selection from her new series Floridas — a layered portrait of the state and a follow-up on her previous project FloodZone. There’re seductive contradictions in Florida’s scorching heat and the refuge of excess. The boundary between land and sea is not razor sharp. Florida is swept into its own myths as the peninsula slowly sinks into the ocean. Samoylova portrays the state as a stark place — culturally, politically, economically, and climatically. Her imagery wears this starkness quite visibly. The monograph Floridas, where photographs by Anastasia Samoylova and Walker Evans are presented in parallel, was recently published by Steidl.
The book will be available at the booth.

In 2022, Samoylova was shortlisted for the Deutsche Börse Photography Foundation Prize and will present an extensive solo exhibition at the George Eastman Museum (New York, US). Recent exhibitions include Kunst Haus Wien (Vienna, AT); Chrysler Museum of Art (Norfolk, US); HistoryMiami Museum (Miami, US); Kunsthalle Mannheim (Mannheim, DE); and Museum of Fine Arts Le Locle (Le Locle, CH). Her work is in the collections at the Perez Art Museum Miami, Museum of Contemporary Photography Chicago, and Wilhelm-Hack Museum, among others.

Satijn Panyigay
Satijn Panyigay works with uninhabited spaces, architecture, and seeming emptiness. Her presentation consists of the series Soft Solace, an offspring of the ongoing project Twilight Zone that reveals empty exhibition spaces of leading Dutch museums. Made at the request of Museum Boijmans Van Beuningen (Rotterdam, NL), these works show the museum’s building during one of the major stages of its renovation — the removal of toxic asbestos materials. In the resulting images, the light shines unabated, the iconic architectural forms appear with no visual obstruction. Works from Soft Solace might seem dynamic, yet silence is at their core.

Bart Lunenburg
Our presentation will also feature the work of Bart Lunenburg, as an introduction to a new collaboration. In his multidisciplinary practice, Lunenburg approaches buildings and cities as if they had a memory of their own. A House with Two Shadows consists of sculptures that explore the cycles of (re)construction of the Medieval timber architecture and city fires and plays with the idea of a site as a patchwork. The core of the sculpture is often burned, charred, and encapsulated in the new version of the same house — fractal constructions succeeding each other through time. Photographic works from The Healer draw on numerous examples from the history of epidemics when the air was seen as a source of contamination. Herbs such as juniper, bay leaf, or thyme were burned to purify and heal the site both in large-scale city fires and in households. For his abstract compositions, Lunenburg builds oak models and incorporates organic materials, fire, and smoke. In an openly interpretable way, this series is about hope and healing, decay and destruction.